There is no way they are going to delay the JL and release the JLU first. If anything they would hold both back.

For one, I know if I were in the market for the Unlimited and I heard the 2 door version which is 95% the same vehicle were having issues and being delayed, I would NOT feel confident buying the one they released first. Anything signifcant enough to cause such a big delay would likely be a major component or platform issue that would make me question the reliability of both 2 and 4 door.

Alvin R said:
The possibility of a delay can't be ruled out at this point. We've seen hundreds of spy shots and they were all JLU.
Click to expand...

And, the absence of evidence is not evidence of absence.

Are you now cancelling your pre-order?

But that is still 25% of sales! Way too much not to have it ready at launch. Plus it is still at the center of the entire Jeep brand halo. It would be a marketing disaster to release a new Wrangler without a 2-door to sell the image.

Good news. can we expect the usual differences between 2 and 4 door like with the jk/jku or might they be even more distinct with the JL? 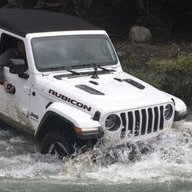 Would be interesting if the JL 2 door wheelbase and length is a few inches longer than than the JK 2 door to improve ride & handling on - road or on gravel....

Gavin said:
Would be interesting if the JL 2 door wheelbase and length is a few inches longer than than the JK 2 door to improve ride & handling on - road or on gravel....
Click to expand...

Could happen if the 4 door's wheelbase increases a few inches too. It looks a little longer to me but could just be all that extra cladding on the prototypes.
Advertisement
You must log in or register to reply here.
Share:
Facebook Twitter Reddit Email Link