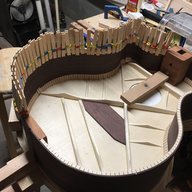 Thanks. Still doing some investigation before involving the dealer again.

1. Taped off the windshield this morning: no change so that’s off the list
2. Cannibalized my engine stethoscope and attached it to a piece of tubing. Drove around while listening in various areas and believe (surprisingly) the sound is originating on the upper front corner door seal. The squeal was there with my hardtop and my soft top so I think I can rule out the a-pillar and top plastic interface pieces. Looked over the door seal and don’t see any tears, rips or other issues. Going to have to look closer tomorrow.
Advertisement

I purchased my 2018 JL in August of 2018, around August of 2019 i started hearing the whistle in my windshield. Yes, it was very annoying. I contacted the dealer in NC where i purchased the jeep, they said they heard it and tried to seal it but it required a new windshield. I was told the windshield was ordered, and would take two weeks. Never heard from them again. In Dec. 2019 i called again, they couldnt find a windshield, i called back in January they said they didnt order a windshield. After all that a nasty service manager called and said they will not be ordering a windshield as the windshield was only under warranty for 1 year, i open a ticket with Chrysler and they said the same thing.
I took it to another dealer and was told they fixed it with the silicon that was mentioned above. Im really tired of Jeep and their issues that they try to dump on the buyers..this is the not first time i had issues purchasing jeeps. /ventoff

I’ve had the exact same issues. Loud screaming noise starting around 65+ mph. The dealer said the noise is normal wind noise. I took a video of the noise immediately after leaving the dealer.

texmexmicah said:
I’ve had the exact same issues. Loud screaming noise starting around 65+ mph. The dealer said the noise is normal wind noise. I took a video of the noise immediately after leaving the dealer.

I had the same thing and the dealer ended up replacing the windshield to fix it. It would only happen on days where the outside temp was over 70.
Advertisement
You must log in or register to reply here.
Share:
Facebook Twitter Reddit Email Link