Why is a Sahara taller than my Rubicon? 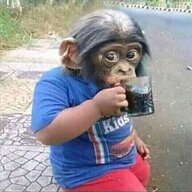 mnjeeper said:
So, did we mention tire pressure yet? Bet the Rubicon is at 31 and the Sahara is at 45!
Click to expand...

Not sure of the pressure in the Sahara tires but the Rubicon is at factory 37-38 psi.

I guess I just ASSUMED the Rubicon would be a bit taller because of the tires and maybe I had an pre-conceived notion the R’s are taller.
Advertisement 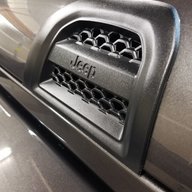 Shots said:
That's a common error/confusion.
Wheel size doesn't matter, tire size does as you pointed out (though you said wheels). However, even that is minor when it comes to stock tires

By conversion alone the tires are 0.65" different, which means a height difference of 0.325" (or between 3/8 and 5/16). I mention the conversion because some tires are slightly bigger/smaller than the spec size. Depending on what tire is on each vehicle, the difference may be a little more or less than that 5/8" difference in calculated sizes.


Yes...wheel tire combo. I have a sahara with rubi take-offs so mine sits a bit higher than stock. But still not as high as the OPs stock sahara.

Me too.... well kinda. I have the take-off wheels too.
I actually got the optional Sahara wheels with the intention of keeping them, but it turns out tire choices were not so good with 18's. I ended up with take-off wheels to be able to get a set of tires I liked in a size I wanted.
The sheep generally do not like the sheepdog, Until the wolf shows up.
Then the entire flock tries desperately to hide behind one lonely sheepdog.

I think that the answer is really pretty simple. Either the factory screwed up and put a Sport suspension in the OP's Rubicon or it's really a Sport with Rubicon decals. (Just kidding about both)

My bone stock JLU Sport is only about 1/2" lower than the OP's Rubicon. Does that sound right?

Al G said:
My bone stock JLU Sport is only about 1/2" lower than the OP's Rubicon. Does that sound right?
Click to expand... 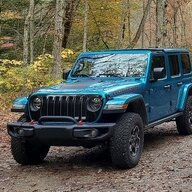 On another forum I used to love pointing out the fact that in the specs on the official jeep.com website it showed our 2013 Sahara had a higher ground clearance than the same year Rubicon. I think it was only 0.1 difference but fun anyway. 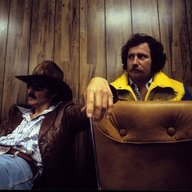 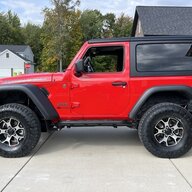 Yes it does, check it out.
When you rotate the images (2° clockwise on the front view, and 1° clockwise on the rear view) to level the Jeeps, and crop them to remove perceived angels/heights from the buildings in the background it gets interesting. So what does it all mean. Well for one it means we are all very bored to be this deep into this topic, but hey it's still Jeep talk.
Seriously though, what this tells me is that the Rubicon sits slightly higher in the back and has more rake than the Sahara. Notice all three references at the back of the Jeeps are higher on the Rubicon (the mirrors are in the middle).
That means the back end of the Rubi is higher than the Sahara. Near the middle (mirrors and roof at the windshield) they are about the same height, and by the time you get to the front the rake has made the Rubi lower than the Sahara.

There you go, mystery solved. The Rubicon has more rake than the Sahara making it appear shorter depending on the reference point.
The sheep generally do not like the sheepdog, Until the wolf shows up.
Then the entire flock tries desperately to hide behind one lonely sheepdog. 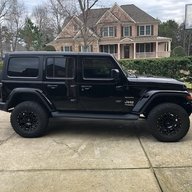 @Shots Thanks for solving this mystery for me, it's been keeping my up at night.
It's great to know that my Sahara isn't the only one that stands tall and proud (and looks down on the R Jeep that shall not be named!)
ProComp LED headlights (with adapters), smoked LED tail lights, painted the exhaust matte black, and front grill inserts matte black. Wheels 17*8 Pro Comp 05 Series, BFG KO2s 285/70/17. 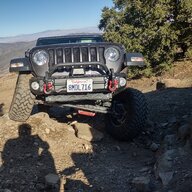 Until you take your jeep on a trail, test the articulation, breakover angle, etc... All of this is meaningless. Sahara has short travel shocks so all the height is mostly cosmetic.

Well I don't think it's any surprise that most Saharas aren't extreme off-roaders. Being able to handle a moderate trail is all most of us need and the stock suspension is certainly up to that task. So, height being cosmetic is fine with me.
The sheep generally do not like the sheepdog, Until the wolf shows up.
Then the entire flock tries desperately to hide behind one lonely sheepdog.

How much more does the 3.6 weigh compared to a 2.0..might be enough to make a difference. 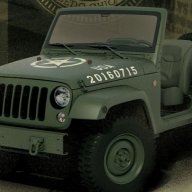 2-Door Rubicon taller than my JLUR??

Why do some Rubicons stand taller than others? (Stock, no lift)
2 3

What is my psychosis and why
2 3

If the Rubicon is taller, is it because of the wheels only?