What's the benefit of the LED lighting group? 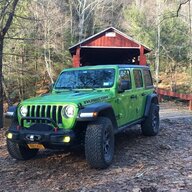 paffemt said:
The yellow color doesn't help if the lights aren't projecting. In the 2 snows I experienced, the fog lights were completely occluded by snow. Only the very top of the headlights were projecting, albeit upwards which caused the "Hyperspace" effect.
Click to expand...

They definitely need a heater grid. But for 95% of the year they are far superior. When I changed my Dodge Ram bulbs you a drop in replacement led bulb, I have to occasionally stop and clear the lenses. Not ideal but I already have to stop to clean snow from building up under the wipers. So it’s just one more step. Truck lite has a version with the heater grid built in for the Jeep. So if it ever really bothers me I would seriously consider them as an option.
I am surprised that the manufacturers haven’t been called out about this issue more from the northern states or countries. 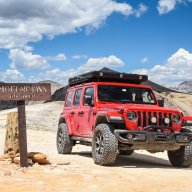 My 2 cents echos the majority of the other people on here, the LED group is amazing and I would never buy a JLU without it. I had a rental JLU sport with the standard halogens last fall and those lights were absolutely awful. As far as the concern about snow buildup, I'm in NJ so our snowfalls usually aren't too bad, but I'm looking at adding on some ARB lights which would solve that problem.

sanman357 said:
I am surprised that the manufacturers haven’t been called out about this issue more from the northern states or countries.
Click to expand...

i hear you. however the headlight buckets have been around since the yj days (1987) i'm in ny and just as you mentioned, i sometime have to get out and clear the snow off. so one extra step in cleaning out the bucket is part of the norm. of all vehicle i've driven, i've had to get out and clear the snow and or ice. its just a natural thing in doing. as for the jeep and jeep designers, i'm sure they've heard the plenty of times and how knows that it might be in the works to solve this "problem / issues" for some folks. but jeep will continue in keeping the traditional wrangler design that works for over 75 years. if jeep comes up with something, it will be another option in the cold weather group.

i'm sure it would be helpful / useful for some folks that wants it. however, for others folks it will be an option that will not be missed just because it another cost and potential issues that could come up. i'm one that just want a plain and simple set up.

paffemt said:
My Halos stay on when I turn off the DRLs.
Click to expand...

Wait...the halos and the DRLs are two separate systems??? 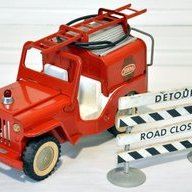 sanman357 said:
They definitely need a heater grid. But for 95% of the year they are far superior. When I changed my Dodge Ram bulbs you a drop in replacement led bulb, I have to occasionally stop and clear the lenses. Not ideal but I already have to stop to clean snow from building up under the wipers. So it’s just one more step. Truck lite has a version with the heater grid built in for the Jeep. So if it ever really bothers me I would seriously consider them as an option.
I am surprised that the manufacturers haven’t been called out about this issue more from the northern states or countries.
Click to expand...

It was definately cheaper to add the Hella halogen lights that may only be needed one or twice a year vice the cost of adding heated lights. 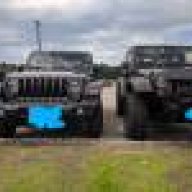 JeepScares said:
Hi,
I am trying to figure out why anyone would pay $1200 for some LED lighting.

What are the benefits you get for all that money?

Blinding everyone around you?

scrape said:
I live in a well lit urban area and I am considerate of other drivers. LED headlights are annoying enough as it is on cars, nevermind a jeep or a truck. There are tons of posts on this forum about people getting flashed by other drivers, and one guy got pulled over.

The LED lights are also like a $1000 option, for that you could throw a pair of XL80s on the bumper and blow the OEM LEDs out of the water. Best of both worlds, tons of light when it is appropriate, and soft halogens when you're in traffic.
Click to expand...

They are extrememely annoying to be in front of one on the highway. I either pull over and change my side mirrors to bounce it back to them if they are following too close with them on. 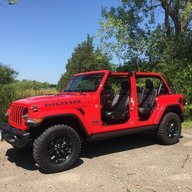 I love the LED lighting on my JLU - Not only do they look cool, but they are really effective. I did lower the aim a bit, and the flashes back to me have completely stopped..

However - 1 issue - In wet sticky snow - they are horrible!! I have had multiple jeeps and never had an issue. This past winter I found myself driving practically blind in a snowstorm.. I was thinking it was just snowing that hard. I could barely see. Turned out, my headlights were packed with snow. The LEDs do not generate enough heat to melt the snow off.. Looking at some heated LED headlights. they are over $600 a set.. and I like the stock Jeep ones.. so that is my only gripe about them. 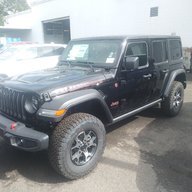 Ive had 2 JLs. My first sport had halogens. The 2nd Rubicon had LEDs. The LEDs are much better lights. 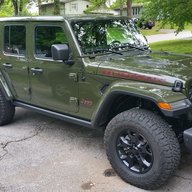 There's also a question of power consumption. LEDs use a small fraction of he power required for halogen filament bulbs. Combined with the high amp battery, I don't have to worry as much if I'm using them while out remote camping. I just got my 2020 JLU and went with the philosophy of order everything and regret nothing. Not even one letter. 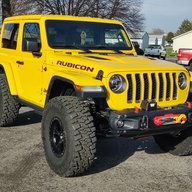 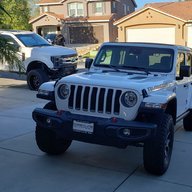 I will chime in with my 2 cents as it may help someone out in making a decision, not saying my decision was right.

I recently purchased a 2020 JLURD, I debated upon ordering about the LED package, I like the headlights and the tail lights from the look and light output, however I also order both of the safety features and one of them included the LED taillights as part of the package so if I ordered the LED package I was basically only paying for the headlights, fog lights and turn signals, but I knew going in that the fenders will be changed or at the very least I would change the large blinkers for the American Adventure upgrade option, I also knew that I would end up with either the Poison Spider Stubby Bumper or the GenRIGHT alluminum bumper and the OEM fog lights wont work, plus I wanted amber lights that low to have more visibility in dust of fog, so that left me with only the headlights as the one and only item I would keep if I had ordered the LED package, so at this point the cost was much more then I thought I would get for my money, I then looked at aftermarket lights, I really wanted a quality light as I am an off road enthusiast, so I looked at what I thought was the best 3, Speakers, Morimoto and Oracle, I like the fact that Oracle was a true 9" rathen than the usual 7" with an adapter, I also found Oracle to make theirs with the option to change the color in the Halo and the eye (projector) and I thought that would be very cool for when we are out in the desert and they could be changed to match the background light on the Rigid POD lights I had already bought.
I also own a 2019 F350 to which I did not get the LED package as I wanted to built it to my liking, adding red-smoke LED tail lights and Morimoto LED Projector lights with black housing and I can tell you I am more than happy that my truck is different to every stock Ford I see out there, not 100 % unique but different, I expect to do the same with the Wrangler, in the case of my Ford it ended up costing me more than the original LED package which I was aware of (lights were $1500 alone), but for the Wrangler I think I will break even, but will have something different in the case of being able to change light colors on the headlight.

Having to change things after the purchase of the vehicle would mean that you are gonna have to pay for the parts right away, so I can understand including the great set of LED lights into your purchase of the vehicle would be ideal for most poeple as quality aftermarket lights are not cheap, but it is also untrue that there is no match for factory LED's (at least not for my Ford as Morimoto are much better looking and brighter), it's a wrangler so I really can not understand what people are talking about when they mention OEM and fear of falling out of grace with the manufacturer over aftermarket add ons, but maybe some folks just use their rig as close to stock as they possibly can. as I say I dont expect me to be right, it's a wrangler so as long as you are happy then you cant go wrong LOL

With all that said I have only had the Diesel Rubicon for a week, should have the lights this week and install them over the weekend along with some Rigid lighting to have visibility, bumpers would be next then I have to make up my mind on the lift, but really want to add King shocks to match my Ford, they are expensive thought so I am waiting to catch the wife on a good day LOL 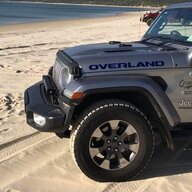 wibornz said:
I got the best headlights that I have ever had on a vehicle. They should last the lifetime of the vehicle. You can not put quaility LED light through out the vehicle any cheaper. Literately, the only reason you would need a light bar is if you were running high speeds at night like out in the desert. You will only add lights for looks because if you are crawling or driving on the street, you will not need to.
Click to expand...

I agree and I live in regional Australia where our local roads are thru forests and open farms are not lite . WE also have a Grand Cherokee 2015 with spots on the front , the JL's lights are 95% as good as them .
Advertisement
You must log in or register to reply here.
Share:
Facebook Twitter Reddit Email Link

Why do you need the Safety Group to order the LED Headlamp and Fog Lamp Group?
2