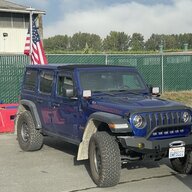 obviously, a set of fog lights would be the first required part (ain't I smart?)
if I stick with getting a used set of OEM led's, are the brackets interchangeable? direct wire without having to splice/cut?
any and all suggestions would be greatly appreciated
I did go with simply replacing the bulb with an LED one, but there's condensation in the lights & although they work fine, my OCD is screaming at me
Advertisement
OP
OP

to phrase things more specifically:
If I get a set of OEM LED fog lights, will the halogen harness from the sport s simply plug in without any kind of additional wiring adapter, harness or the like? 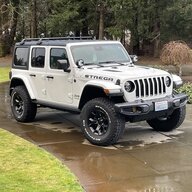 Hey Jeff, my neighbor has a sport and we recently did a swap to LED Fogs, long story short the Mopar LED fogs that come in the Sahara/Rubi front bumper use a different bracket system than the sport bumpers.. Also from past experience I have had some problems with some flicker going from the halogen to LED Mopar fogs, I know some guys that haven't had any issues.. What we ended up doing was getting a set of Diode Dynamic SS3 sport fogs in (selective yellow), they make a fog and bracket system to fit right into the sport bumper and bolts up extremely easy they fit very nice in the stock bumper and realistically, probably won't cost too much more than take off OEM lights if not cheaper.. He didn't have any flicker whatsoever with the DD SS3's he did have an issue with the MOPAR... with that being said, there is an app called JSCAN you download it on you iPhone or android and then buy the associated bluetooth OBD connector and a Chrysler 12+8 cable you can then set all your lights to run LED, Tire pressures etc etc, and its has been my experience along with quite a few friends that it is an awesome awesome alternative to the Tazer, Flashcal so on so fourth, and also will allowing you to change certain parameters as the jeep gets modded. Where at in WA are you Im up in Bellingham area.. 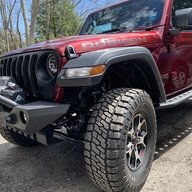 JLUR - Switching from Halogen to LED
2