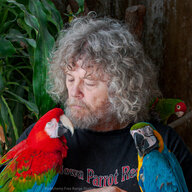 We're all very aware and proud of the Jeep lineage, descending from the '41 MB2. Yet, we seem to need to subdivide into as many subsets as possible. Why?

To me, the 2019 Jeep I drive has enough design keys and functional genetics in common with all those older builds, that I see it as just the most recent version of what they were building in my youth. Why not just call them all what they are...Universal?
If you run your mouth without provable information and valid logic, it's NOT an "opinion", it's an attitude. Reality exists, like it or not. 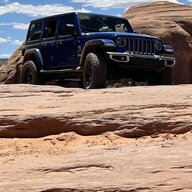 Hello. I work in the auto industry and let me give you this to consider....

Take vehicle manufacturer “ABC”. You will hear them talk about Model “Y”. For the sake of discussion let’s call the Model “Widget”. Widget will also have Model Years attached to us and if the Model is successful enough you will hear the Manufacturer talk about Major Model changes. These are the instances when the Model will see extensive appearance changes. Some manufacturers may even drop the words “ALL NEW” or “NEW AND IMPROVED”. Most manufactures will have said Major Model changes every 4 to 5 years.

So let’s go back to your point of Jeep. With its storied history, there have been several of these Major Model Changes. But we all don’t talk a whole lot about the years. We focus (at least it has been my experience) on the....CJ, XJ.....JK, JL tags with individual cover a multitude of Model Years.

One would not expect a general component from the CJ to work on the JK or Vice versa.

So the folks in the Auto Design groups of the world have to have a way to designate the specific “MODEL”.

In my mind we in the Jeep world are not as subdivided as one may think.

As stated above, how else would you distinguish generations of the same model? They’re just chassis designations used by the manufacturer that are adopted by users to differentiate one generation from another.

I could say that a 2001 Nissan Skyline is better than the model built in 1996. R34 > R33 is just a shorthand for saying the same thing that Skyline people will get. Although some would disagree.
Why, yes! I do have a build thread:
https://www.jlwranglerforums.com/fo...-thunder’s-most-excellent-build-thread.21882/
OP
OP

Acknowledging both of your points...however, despite decades of changes and Major Model changes, a Corvette is still a Corvette, and an F-150 is still...ok, you see what I mean.

Obviously we have to distinguish the brick (Universal, Renegade, Scrambler, Wrangler, ) from Wagoneers and pickups, just as Chevy has to distinguish a Vette from an Impala. And I know that enthusiasts and wrenchers have to distinguish the various iterations, thus the CJ, YJ, TJ, JK, JL...just as Corvette has gone through Cs 1-8. However, to me, a vette is a vette. Tell me it's a vette, gimme the year, I got what I need. All my pickups have been Rams, various years from the 80s on. I expect there are identifiers for them, but my 97 and my 06 are just Rams.

So, there probably have to be JK, JL, et al., though I dont really care. But for the love of Jeepus, get rid of the cutesey ad agency names. Back to Universal...they had it right in 1946.
If you run your mouth without provable information and valid logic, it's NOT an "opinion", it's an attitude. Reality exists, like it or not.

Ok. You seem to feel strongly about it. From here on out I’ll just call my Jeep a Jeep because it doesn’t hurt me and makes you happier. Win-win.

Glad I could help.

Why, yes! I do have a build thread:
https://www.jlwranglerforums.com/fo...-thunder’s-most-excellent-build-thread.21882/

The comments to the OP above mine are full of reason and sense. I must balance this out.

Go on, say the code and let the other owners know that you’re in and follow... the code. After all, isn’t that why we are all here?

On the JL forum and not the Wrangler forum? *evil laugh*

Names sell. Fundamentally a Jeep is a $28k vehicle. Easier to sell a Rubicon™ Recon© Unlimited® Jeep for $50k base instead of showing someone a build sheet with a $28k base and $22k worth of options. If they did that, the consumer might accidentally make an informed decision. 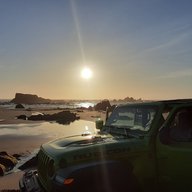 How about going back just 2 years when fca made jk and jl models in that same year. You order a soft top and wait weeks for it to come in. The day has arrived big brown shows up and you rip into the box laying everything out. Take off your hardtop and get to work. Shits not lining up things start getting thrown in garage when you realize your universal top won't fit your jl. 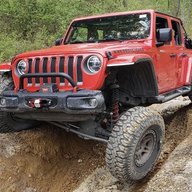 money....that is why there is not just 1 jeep wrangler model. They limit certain features to higher priced models so that if you want just that one particular feature you have to pay a bunch more to get it in the higher trim package. 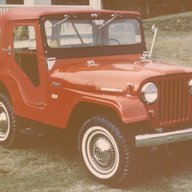 A jeep owner of almost all models since 1965 I think starting with a base model Jeep and adding "stuff to make a slightly different "type" is good for Jeep. Varity is the spice of life. It's a way of course to "make more money" by giving buyers a choice to spend there money on! It's been this way for a very long time.

For instance the 1965 CJ5 in my side bar was my first and it was maybe one of the first with an addition to the "Universal" name, it was called the "Tuxedo Park" options were rolled and pleated "nauga" upholstery chrome front bumper and a V6 engine. Sucked me in from the plain ole "Universal Jeep"!! I paid just under $3,100. or about $1200 more than a plain Jane Universal. That $3,100 is compared to our 2018 JLUS is about $43,000 less! That is of course a long time ago and things certainly have changed, at least money wise. You can see by that pic that Jeep still remains closely the same after almost 60 years!! lol 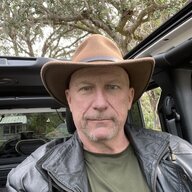 Maybe if you think in terms of military legacy and naming conventions, you will feel better about it. The first Jeep was the G503, Truck, 1⁄4-ton, 4×4, Command Reconnaissance – made by Willys and Ford. Then you had the M38 and the M151, with sub-designations for upgraded versions of both, in various configurations. After that was the High Mobility Multipurpose Wheeled Vehicle (HMMWV - “Humvee”) with a ton of various designations - M998, M1114, M1151, etc.

Here is the bottom line. All military Jeeps were Jeeps. All Humvees are Humvees. From the CJ “civilian Jeep” forward, are all Wrangler-style Jeeps.
Jeff Cook
Sergeant First Class
United States Army (Retired)

If you look at the side of the hood on the only side you can see you'll see a plate covering up the space for the snorkel. So what still existed was a military Jeep painted red with chrome bumpers and fancy seats! lol

My CJ5 was the first of 27 jeeps so far, last one a JLUS a bit more up to date than the '65, lots better on the highway and maybe(?) a bit better off road...maybe! lol

wolfdog said:
If you look at the side of the hood on the only side you can see you'll see a plate covering up the space for the snorkel. So what still existed was a military Jeep painted red with chrome bumpers and fancy seats! lol

My CJ5 was the first of 27 jeeps so far, last one a JLUS a bit more up to date than the '65, lots better on the highway and maybe(?) a bit better off road...maybe! lol

George, one day I would like to get a CJ5 and do some wrenching on it - if I can find one cheap enough, and as long as I’m physically capable. I had my eye on a 5 or a 7 when I was young, but “settled” on a ‘73 Toyota LC FJ-40. Man...if I had only kept that beast! I bought it in the early 80’s for $2100 and drove it till I broke it - and let me tell you, I DROVE it, through flag ponds and over palmettos! Surprisingly, the only thing that broke, other than a water pump that I replaced, was the engine.
Jeff Cook
Sergeant First Class
United States Army (Retired)

Wabujitsu by the look of your picture if that's you I'm a bit older but that first CJ was the best, had 2 CJ7's that were probably a great step up but had the same water leaks and had a non-Jeep That's what other Jeepers called it a Scrambler and loved that, long story short all the Jeeps out of 27 loved them all, even a couple that would qualify as real lemons! My wife seems to love the 2018 JLUS better than all the others?? It was supposed to be mine, ya sure! I'm stuck with my 2015 Cherokee Trailhawk that she was supposed to end up with! Actually the TH is pretty good, even off road!

I do get to use it on the weekends if I'm good and can get it all dirty before I clean it up of course! I have modified a few but now stock with aggressive tire works for my off road excursions.