I've been looking for CB antenna mounts like crazy. Most of the ones that I found were mounted on the back of the jeep, which is fine for most. But I wanted to ensure maximum signal coverage. So I wanted a hood mount, but couldn't find one for ever.

I found Topsy Products (I don't even remember how since I look in so many places). I've been using it for about 6 months (I think?)

So here's my quick review. (I'm no expert)

At first, I was hesitant because I thought it may damage the JLU fender panels. I saw the video that Topsy posted riding on the highway at 70mph, but wasn't completely sold on it. So I did what any rational person would...I ordered a CB hood antenna mount from them. It was shipped quickly in a very patriotic box (that was cool).

The first thing I noticed is how sturdy the steel is. Immediately I realized there's no way it was going to bend. Then I saw the instruction paper (I didn't read it, but it sure looked nice with pictures).

It came with an extra self-tapping screw. I thought I was going to needed it. I'm running a Firestick II 5 footer (now I'm running dual antennas). The mount uses a JL fender bolt. It doesn't even have to been taken out all the way. I'm still hesitant of using self tappers without adding rust protection, so I skipped that to see how it went.

It has been 6 months (or so now) and it hasn't even flinch. Highway, banging on trees, trail brush, and all that. I was so impressed I ordered a second one and a mic mount. I'm running dual antennas because I prefer how it looks and also prefer the way the signal pattern is distributed (oval) for my use.

I added both antenna mounts (maybe a month apart each) and haven't removed them since.

I added the mic mount also. It's extremely easy to setup and a perfect distance from driver. It's sturdy and I am planning on adding the HAM mic on it also. It says you can mount two things, but I haven't tried it. As far as one mic, it's perfect as is.

So, in short. If this is the kind of CB setup you are looking for, then this is the mount you need. Don't waste your time. I did that for you.

Here's the link where you can order them. They have a youtube page also with jeep stuff too. 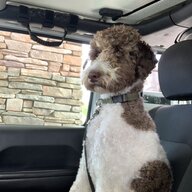 Just wanted to say thanks for your post. I’m in the market for a CB radio so I can get on the trail with my 2018 JLU Sport S with some friends. I don’t know Jack about CBs, but the photos you posted have helped me decide. Love the mic mount. Thinking that I will try to find a less conspicuous mount for the power box though. I like your double antennas but think I might put a trail flag on one side instead. Anyway, thanks again. Cool Jeep.
Advertisement
You must log in or register to reply here.
Share:
Facebook Twitter Reddit Email Link

Jeepers and Kayakers - How do you mount your yaks?