I've tried going through the sticky best rock rails/side steps, and countless other posts, but have not found the right option and am reaching out to see if there is anything I've missed. I'm looking for a step option because my grandmother has a hard time coming in the wrangler. I have a 2019 Wrangler Rubicon.

Initially I started looking for a step similar to NFab, RC, smittybilt, or westin HDX which were all traditional fixed drop step/tubular design. The issue I have with those is that they are not frame mounted, and from what I've read on posts so far it is better to have frame mounted since they handle hard hits better. I also noticed how despite it saying wheel to wheel in pictures it does not cover the entire front or rear and there is some body of the vehicle exposed which with the stock rubicon rails the entire front is covered. Also these wouldn't be the best option for when I go rock crawling since they would get caught on rocks.

I then started researching some more and found Roam and LoD rock rails which have a step function. These had the same issue as the others since the front and rear are not completely covered. I'm not sure if this actually makes a big difference but I figured since the stock rubicon rails are completely covered perhaps its best to find an option that is about the same. I've also heard mixed feedback regarding how well Roam holds up in terms of quality, but I understand with any mass product there are always some with an issue. I was leaning toward Roam, either option is frame mounted, but I feel it would not offer much of a step. In about a month I plan on adding a Mopar 2" lift and either 35" or 37" tires, and once the jeep is higher that would move the rails also which in turn would make the step just a difficult as if it was stock.

This led me to another option which was rock slide engineering rock rails/side steps. I liked the way they look, but they seem to also not cover the entire front/rear. The only issue I'm having is long term reliability. I will be doing a lot of off-roading/rock crawling and I know this product advertises that they will hold up, but I'm not sure how they will be after a few years. I plan on keeping my Wrangler for a very very long time as it is really a vehicle I love and don't see me wanting anything else. I feel over time there may be issue with it retracting, not being able to handle off roading after 3+ years, or even general electrical/pivoting issues. Those have really put me away from a power step option.

After going through all the posts on here, even every page on the sticky, I still have not found an option. Perhaps I'm being unreasonably picky. I've come to the conclusion that I want some form of step that can mount in conjunction with the factory rubicon rails. The reason for this is that the factory rails covers the entire front and rear of the side unlike alot of other options. The only one I've found looking online and through posts are the ACE rock sliders which mount with the Rubicon rails and can give a step. I've also found M.O.R.E. hide a steps, but have not seen many pictures of how they look and how durable they are.

Please let me know if there's any option I have not seen yet that may work out. Trying to just put it on and not have to worry about it anymore for as long as I keep the car. Something that is really durable and good for off roading/rock crawling. Something that will cover the entire side like the factory rubicon rails, and most importantly serve as a good step even after putting a lift and bigger tires (just as a note my grandmother is 5'2 currently I bring a step stool wherever we go so needing something as soon as possible).

Thanks for the help!
Advertisement

Read @StrikeZ 's thread yesterday, very impressive. I have the @ROAM ones using as steps everyday, wife and kids love them. Also, price is reasonable.

Page through the Rock Hard options. The patriot series can be tilted up, down, not tilted. They can be covered or not covered, two different styles of step plates as well for the covered version. They are frame mounted and extremely sturdy. Customer service is awesome. They come very well packaged. Form and fit is spot on as is the quality of the coatings. https://www.rockhard4x4.com/category_s/487.htm 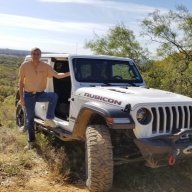 Did you ever find an option that you were happy with. I'm in the same boat as you. I want to keep the Rubi-Rails both for aesthetics and function. I'm open to either add on individual steps or frame mount full length steps that mount around the Rubi-Rails.
2019 JLUR
3.6 Auto
Advertisement
You must log in or register to reply here.
Share:
Facebook Twitter Reddit Email Link

side steps with rock rails?
2

Custom rock rails and side steps