Anyone buy one yet? How do you like it?

I haven’t bought one yet as I cancelled my 2018 JLUS and I’m waiting for the 2019 order bank to open. JTops has a soft top boot that looks nice. Open the link and scroll down until you see it.
https://www.jtopsusa.com/jl-shade-tops

I bought the JTops boot after having one on my JK. It is a clean look that’s is fairly easy to install. They had to modify the design due to the extra bulkiness of the JL top as well as its need to sit down in the tub to provide maximum rear views. Once I figured it out (thanks to a very quick email response by the owner that included pics), I am very happy with it. 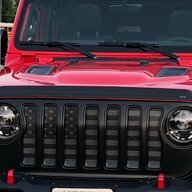 Bought one a few weeks ago and just put it on for the first time yesterday. At first I could not figure it out, because it would not fit. But after speaking with Mike @ JTOPS, he advised on how to properly attach it.

The bottom flap of material isn't supposed to go into the boot (it won't fit). It was designed that way so that the top doesn't sit higher up in the back. They bottom flap sits inside the cargo area of the vehicle.

The other concern I had was that it felt like the straps were barely long enough to fit around the material. I was told that it was by design so that the extra strap material would not flap in the wind.

But overall, it does have a cleaner look to it. It also makes it easier to store the top in the winter. Also, it eliminates any tie downs needed for the top while its open.