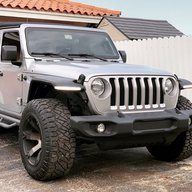 Hey guys, I have another thread on my setup but I figured I'd create a separate one for the issues I am having and have also resolved. So after having the 35s installed on my JL Sport Unlimited the first obvious issue was the Euro fender extension whatever you want to call it was being crushed by tire upon turning it from one side to another. Most just remove these but I took a dremel to it and cut it so that my fog light wires are not exposed and it creates a seal now. You would think aftermarket companies or even Jeep would be rushing out to release an already pre cut part for owners that upgrade to bigger tires but early adoption woes... Million dollar idea if any of you are capable. I can post pictures if you guys want to see how that turned out... I have two other issues I'd like your help on. The second biggest issue is my backup camera is now obstructed by the wheel. This also auto disables my rear parking sensors and throws an error on screen every time I turn on the Jeep. I would assume aftermarket makers would be designing something to either push out the camera more or maybe a different carrier that will allow the wheel to fit closer to the rear door and thus having the camera stick out more? Is something available for this already? I have minimal rubbing on the rear bumper btw because of the -44 offset so I'm more concerned with the camera\sensors. Do we have any current solutions for this or must we wait? Lastly when they installed the wheels\tires I noticed my TPMS sensors are now not properly orientated. The computer reads rear left as front right etc. Is it possible to have the Jeep relearn without having to take it to the dealer? Could unplugging the battery have the sensors re learn? Thanks for your time guys! Problems aside I do not regret my decision to go big.
Last edited: Jun 26, 2018
BILLET BEAST
FUEL BEAST D564 20X12 -44
NITTO RIDGE GRAPPLER 35x12.50r20
Rugged Ridge Max Terrain Fender Flares
Stock Suspension Sport/No Lift
Advertisement
You must log in or register to reply here.
Share:
Facebook Twitter Reddit Email Link

Ordered the 35s and Fuel rims
2

Shorter drivers and riders with 35s