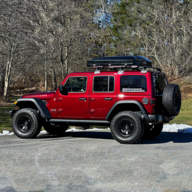 Notams said:
Reviving this thread to add another way to route wire.

So I posted a question regarding drilling through the A-Pillar today. Lots of views, no comments or answers regarding whether it would work or if it would compromise structural integrity. I had read another's post on the JT section who had wondered the same thing. He ended up routing his RF up the A-Pillar to his ceiling mounted comms. So he never got an answer on it either.

I hated the idea of drilling into the A-Pillar or even the firewall, so I went out to the garage today to figure out a better way. I think I found a good alternative. I completed it today and it really came out nice.

Here is what I did. I removed the windshield wipers and the side cowl piece above the fender. Then I lowered the windshield. This exposed the dash and the small gap that exists between it, the A-Pillar, and the top of the firewall. Plenty of room to pull wire through. I was installing the MLC-6 Lower switch assembly. Normally I would have removed the wires from the plug and re-assembled after pulling, but all of my electrical tools are still enroute with the moving company and I wanted to get this done. So I ran nylon fish tape (harbor freight) down through the gap and it popped out around the clutch pedal.

Now you can avoid the hassle I went through by doing the opposite of what I did next. I realized a little too late that I should have pulled the small end up and through to the upper dash gap, but I ended up pulling that larger plug down through everything. Stupid I know, but I was rushing myself and not thinking it through. It was challenging in a couple of spots, but even the big plug end made it though. To start the plug/wire, I had to use a prybar to increase the gap enough for it to pop through. This worked flawlessly with no damage. At another point I had to remove the vent that blows heat on the side window and mash the inner vent to get the plug around it. It forms right back when your done. You just have to push it back into shape. After that, it was pretty easy. All of this would have been much easier if I were just pulling wire without a plug on the end of it.

I'm attaching some pics that should give you an idea of what I have been describing. I don't know how to do captions like others have done in their posts. But the pics will be in the order I did it. Hope it helps a brother out. Super easy if you're just running straight wire without a plug on it. And no drilling required. I ran my sPOD’s Cat6 wire from my CBBAR and through my A pillar on the drivers side. The hardest part was taking off the wiper arms to let the windshield down. $15 on eBay for a windshield arm puller.
Don Montalvo, Devon, PA - https://donmontalvo.com 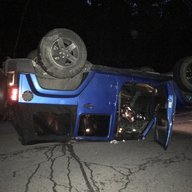 I routed wire for a front camera this weekend for my Heigh10. You only have to lower the windshield a small amount to have plenty of space to run the wires. I didn't have to remove my wipers. So easy.
Ordered 11/3. Red JLUR Auto, soft top only, all options except dual top, Prox entry, smoker and wheel upgrade. Skipped D1, went to E on 1/14, to I on 1/17, to KZ on 1/18. Delivered 1/22. Faulty Air bag sensor solved. 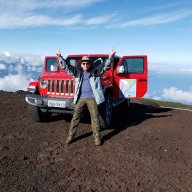 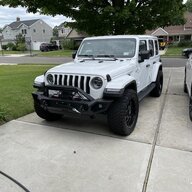 FYI - I ran my wire next to the clutch cable (I think that is what that is) on my 2018 JLU. Plenty of space next to it. I didnt want to do it though the wiring harness grommet on the passenger side after reading about some people cutting some of the wires inside accidentally. Plus I needed the switch on the Drivers side anyway. The wire runs nicely along the windshield side of the engine inside that plastic channel.

I ran a wire hanger though it and then taped the wire to it and pulled it through no problem. Anyone Found a Way Through the Firewall on Manual Transmission JL's?

Leak on Driver Side -- due to amp power wire through firewall?

Yet another thread about wiring through JL firewall
2