Recommendation on a shop for re-gearing in Socal? 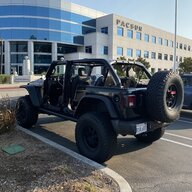 OBJLU said:
GeForce Off-road in Buena Park does amazing work, he works out of his home for the time being but will warranty all the work he does, was the lead tech at some of the biggest shops here in SoCal and built a couple of the [Banned Site] rigs. He did my regear a couple of years ago and it’s been perfect, he’s done work for a few buddies of mine, all flawless, send me a message and I can give you his number.
Click to expand...

Curious what the banned site you tried to post is...

bikenutty said:
I used these guys based on reviews. Bad decision. they quoted me labor only (I had the parts) and required a $100 deposit to make an appointment. thought this was very unusual, but based on the reviews I went ahead and paid it.

Dropped my Jeep off in the evening and they gave me no paper work and didn't want me to sign anything. I asked them to install my RCVs and new bump stops while it was apart, which they offered to do for no additional cost (I would have paid and asked how much more).

upon picking it up the invoice was double the original price quote with no explanation. I was VERY clear what I needed done when I called for quote and appointment. The boss was called into the office and obviously didn't care what I was quoted and said if I didn't want to pay it they'd reinstall my original gear sets (and presumably the other EOM parts) and I'd have to come back another day. there was no offer or explanation for what happened. They also didn't return my old parts, I had to ask for them. I drove from Torrance to Riverside to get this work done and wasn't interested in doing it a 3rd time. it was either pay or come back after undoing the work. I was pretty heated at this point and got them to drop the total price by $100 and took my Jeep (my wife had dropped me off 1/2 hour before). Following the break-in directions they gave me. surface streets as far as I could go, and slow freeway where I had to. as soon as I hit 45 MPH I got a mean vibration. they were closed and didn't respond to my call when I pulled over. they obviously never test drove it. the next day I called and told them I didn't want to drive it or cause damage, the website says they offer mobile service. they wouldn't come look at it or pay to get it towed. I must have called 6 or 7 times and was always told I'd get a call back. I NEVER got a call back once. I ended up calling my credit card company and disputed the charges. Premier did not respond and accepted the amount of the original quote. I have also had "service 4WD" warning lights and functional problems since that day, 2 different dealers and myself have been unsuccessful in figuring out what the root cause is. I decided to just drive it as they thought it was no big deal, and I still have the vibration. Its in the rear, I put it on stands and pulled the wheels and in 2WD the with only rear spinning it vibrates annoyingly.

People make mistakes, and I would have been happy had they corrected the vibration. but the way I was treated plus its not resolved, avoid this place.
Click to expand...

Ouch! So sorry to hear about the issues. These guys post often and seem to be well received on the socal jeeps group.. really wonder what happened. I haven't regeared my jeep yet but your experience definitely wants me to take a pause and reassess! 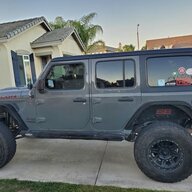 fjavier said:
I am looking at these Southern California shops to regear my JLUR since I live in the San Gabriel area. Anyone have an experience with any of these shops.

I used Premier West Gears and had no issues at all. They got it done when they said and included the 500 mile oil change.
I have also heard that RB Motorsports in Riverside recently hired a guy to do gear changes as well. I've used them for a few things and been happy with their service. 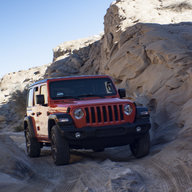 Keith C said:
I used Premier West Gears and had no issues at all. They got it done when they said and included the 500 mile oil change.
I have also heard that RB Motorsports in Riverside recently hired a guy to do gear changes as well. I've used them for a few things and been happy with their service.
Click to expand...

Rock Bottom Offroad in riverside did my gears, OX locker, and axle install in one go for the same price some other competitors were charging for just gears. had a great experience, cant recommend them enough. - no 500mile oil change tho.
Advertisement
You must log in or register to reply here.
Share:
Facebook Twitter Reddit Email Link

Recommendation for a place around Pasadena to fill CO2 tanks

Does anyone have a dealer recommendation in/near the Inland Empire?