NOT a how to, just an after-action for some idea for the next guy were I cut. Sounds like Quake is making a video. If my word-salad below doesn’t make sense just wait for their video.

I always google image projects before I start and I couldn’t find any so it was like driving w the stock Sport halogen headlights-in the dark.

This is my wife’s Jeep the looks are important. I had already installed the Rough County Headlights and DRL led bar. Bar has small LEDs between the reflectors for the main lights. The Headlights have the X DRL.

Halo angle eyes are feminine, these are more like a EOTech or Holsun red dot optic. Just my opinion and I like it. It’s all lines basically in DRL. These new Quakes DRL make a line across the middle of the grille w the RC bar in the middle.

I talked to Grant at Quake before I started to verify the parts were correct as the leaflet was for Sahara. Grant is very friendly and helpful, he even called me back while he was out of town. He seemed to give a rip and is also very knowledgeable,hard to find quality’s these days. I Highly recommend sending business their way from my interaction.

He mentioned in passing the plastic melts easily w high rpm cutting so I just treated it like wood. This was successful for me.

Quake kit comes plug and play for factory Jeep’s setup. For my truck the kit was plug and play to be On in parking lights or headlights, but no DRL on my truck. Either way it meant more than just Auto and forget. I wanted my wife to never think about it so I did the following. (I don’t have a programmer for this truck, Tazer etc would do this also).

Again NOT a how to, just what I did.

2-green and yellow (space) 3-red/white/black. I cut red/white. On mine red/white are powered for park or headlights on, so they are the same. I connected Quake side red to my previously run ignition on 5amp piggyback fused f52 circuit out of main fuse box that’s going to my headlights DRL and the backlight accent DRL in the led bar. Sealed 3 unused cut ends. The plug can be opened to access the pins, I didn’t have the patience.

Sounds like there could be batch variance in the colors so do NOT cut based on my experience, get your Klein multimeter on it first or call Grant at Quake.

I believe the 5 wires in the 6 pin socket will be the same so the 2 powered next to the ground side of the unused space should be the same regardless of colors.

Your choice electrical gear-I solder everything

I cut fender at top of beveled edge for old light. Then ran 80 grit to remove maybe a 16th more.

There were 4 aluminum spacers, mine used 1 under bottom bracket only.

Second w/o fogs is Headlights Off - my version of DRL

No dash errors or hyperflash

The Quake kit is plug and play, recommend the kit and the company.

(my wires coming out of the fuse box will be heat shrinked and protected w abs loom waiting on delivery). 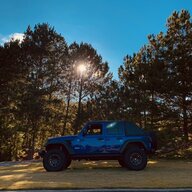 I should have mentioned for those looking at clearance gained:
Full Curie RockJock & 38s 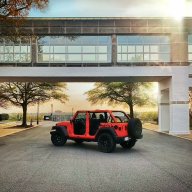