Sean L said:
My dealer was different, they had the JLs together and JKs together, but not all mixed in.
Click to expand... 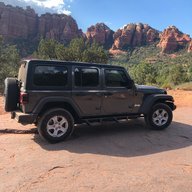 A little off topic but I’ve noticed that all of the dealerships around me (about 6 in a row down the street from my house) that until JL’s started hitting the streets would all prominently feature a JK or two each for a couple of days before they were quickly sold are now sitting with the same JK’s for weeks/months. Many of them are chock full of mods so the price they’re seeking is about the same as buying a brand new JL. I would think there are going to be some smoking deals on JK’s very shortly.

Sean L said:
Yeah, they were changing a good thing (Improved IMO) but are understandably nervous about it. There are some JK owners (just a few) that just despise any changes. They're doing the same thing with the Ram 1500, as they're still going to make a Ram Classic for another year before closing down the Saltillo plant.
Click to expand...

With day rates of about 1,200 units there’s no way they could’ve shut the entire assembly line down for the year it took to retool. Both for the Wrangler and the RAM. There’s simply no way to produce enough stock for a year in advance to keep selling and you surely don’t want to lose the profit. They ran into that issue in 2013 when they shut down Toledo the first time for the Cherokee and are going about it smarter this time to produce both of them simultaneously. It’s not hedging for demand, it’s just not possible to have built up a large enough cushion.
Advertisement
You must log in or register to reply here.
Share:
Facebook Twitter Reddit Email Link

Picked up my Sport S. Lots of JLs available in Oklahoma

Freedom Edition on lots? Worth it?

Getting lots of smiles from the ladies!

Why wasn't the Select Trac available on JKs as it is on JLs?