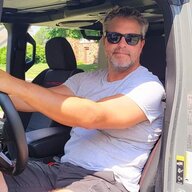 Should I plunk down $465 to have my underbody rust protected?
I live in Ohio so get the usual salt on the roads in the winter.
I plan on keeping the Jeep indefinitely and probably 6 or so years down the line consider a Hemi swap if that is still an option.

I've seen some pretty intriguing arguments against this which have made me decide to not do it. I'm in the Chicago area. Some independent videos out there show moisture getting trapped beneath the coating accelerating rust. I'm going to opt for thorough, frequent, underbody washes. I have plenty of self service washes around me that I'll pop in every couple weeks through the winter. Then I'll buy an attachment for our pressure washer for the spring. I also plan to research further into some salt-away cleaners I've seen recommended elsewhere on the forum.
2021 JLUR
Ordered: 6/9/20
8/13/20: JB Status 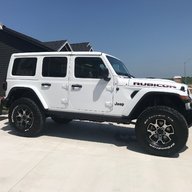 I debated undercoating for a while. I did it on my brand new TJ 20 years ago. Honestly, I don't think I'm a fan.

When I had my TJ done, although a long time ago, they got undercoating on everything. Even places it wasn't supposed to be like the bottom side of the hood.

I feel like a lot of dirt and debris stick to it. Like someone mentioned, I could see how it would trap moisture or similar and lead to more issues.

All of your nuts and bolts are covered and hard to work on or nut and bolt check if you offroad.

My JK I did nothing and the frame was a rusty mess after 1 winter.

on the JL, I think I'm just going to manage myself. Before last winter I crawled under and cleaned up and painted everything with some rattle can rustolium. I'm just going to do that each year. To me it wasn't annoying. It was a couple hours in the garage which I actually enjoyed. Makes me familiar with the jeep. Also has already helped me find when stuff is loose or broke or wrong. I have very minimal rust after 1 year and 22K miles. This year I bought a wire wheel for my drill. I'm just going to clean up some weld and give them a fresh coat. The factory paint on the axles has been the worst so far.

Curious what you decide to do.

The truth is I don't really know.

That said, what gets under my skin (no pun intended) about such services might best be encapsulated by a question a vehicle salesman might ask a customer prior to purchase:

"Um sir/maam; would you like a steering wheel with that vehicle?"

I make this analogy to express my frustration that vehicles should be built to resist, along with reasonable owner care, the average levels of environmental harshness that the markets they sell in face without the owner having to acquire extra services.

This doesn't mean that if you live in a coastal town where the proximity of oceans and the extra corrosiveness they might impose on vehicles might be legitimately more than a manufacture should be required to build for. But simply living in a four seasons climate....? additional rust proofing should be a luxury, not a necessity, especially on a Wrangler, in such locales.
Last edited: Sep 18, 2020

The salt is one thing but up north when they started using liquid brine solution prior to the storms. I feel like any chance or precip and they throw that crap down. It just tears up vehicles. So annoying. 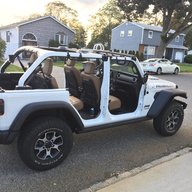 r.stevens said:
Should I plunk down $465 to have my underbody rust protected?
I live in Ohio so get the usual salt on the roads in the winter.
I plan on keeping the Jeep indefinitely and probably 6 or so years down the line consider a Hemi swap if that is still an option.
Click to expand...

Body Mechanic in the Hamptons wanted to charge $2k for Waxoyl Coating and guaranteed his work for ten years in writing. I was thinking about biting the bullet and doing it. But then realized any such coating can make working on the Jeep's underbody difficult down the road. He was pretty honest about it and indirectly recommended me to not get it done unless I see rust after a couple of years. He was a good guy who knew what he was doing.

I instead got me some cans of Fluid Film and coated the hard to reach areas of the Jeep's frame myself last weekend. Took me about three cans and an hour and hit only the hard to reach areas (you know the places where water may not be able to get). I know some guys here get a gallon of Fluid Film and coat the entire underbody; which also a very good idea. I however did not have the tools or experience to do that.

Alongside this, I also intend on power washing the underbody once every couple of months as a method of fighting against rust. You can get a Ryobi underbody accessory from Home Depot for an electric power washer. Recommended to use that accessory and power washing at a minimum pressure of 2500 PSI and Maximum 4000 PSI for best results. I would steer closer towards the 2500 than the 4000 IMHO.
ਜੇ ਤੁਸੀਂ ਇਹ ਪੜ੍ਹ ਸਕਦੇ ਹੋ ਤਾਂ ਮੈਨੂੰ add ਕੱਰ ਲਅੋ ਜੀ।

r.stevens said:
Should I plunk down $465 to have my underbody rust protected?
I live in Ohio so get the usual salt on the roads in the winter.
I plan on keeping the Jeep indefinitely and probably 6 or so years down the line consider a Hemi swap if that is still an option.
Click to expand...

I'm going to ask this from a point of ignorance, so go gentle.

Is there something to apply to roads to deal with the slipperiness in winter from snow and ice that is not or less corrosive?

I too hate what that salt/brine does to vehicles but I do respect that government applies it towards a higher goal of traffic safety.

Sand the intersections and hills otherwise use common sense when driving. Plan extra time all winter. No reason to need salt. Everyone will drive responsible after they see others in the ditch. 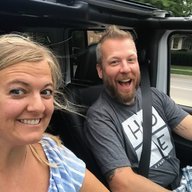 This is my first Jeep and I just can’t understand why a $50k vehicle needs aftermarket rust prevention underneath. I’ve owned many less expensive vehicles and spent most of my life in the wintry mess of the Chicago area, without any rust on any other vehicle. I’m not saying it is or is not needed, but I haven’t done it and don’t understand why so many people do.

I agree with all of this. Still more I agree with @Brenden's suggestion regarding the use of sand.

But at the risk of pointing out the obvious, salt, for all its corrosive effects, does something sand can't: lower the freezing temperature of water and turn ice into a liquid. This no doubt causes less vehicular injuries and fatalities.

I would love to hear of less corrosive ways to deal with ice. By no means am I saying they don't exist. In fact I would love someone with more knowledge than I have in this subject area to educate me/us on reasonable substitutes for melting if they exist.
Advertisement
You must log in or register to reply here.
Share:
Facebook Twitter Reddit Email Link

Is undercoating for new jeep needed?