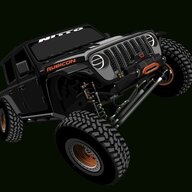 past weekend was asked to come show my face so I did!! Rainbow Falls outside of Woodland Park Colorado, mini Moab hill lots of snow and mud not my things but tires still gripped and I can't complain.... So I have some Carnage on Pritchett Canyon in Moab, the second of third tough obstacle is called "Chewy" and a series of steps on slick rock you gotta give it that elusive Moab bump! I did and spit a chunk of rock out.. the all of the jeeps weight came down on the shock mount which thankfully I have the @Artec Industries control arm and shock skids bent the shaft slipped further to hit the seal housing on the body then hit the piggy back reservoir and blew the shock out. I backed down removed the shock and next hit made it up and finished the trail on 3 shocks! was awesome. sent the shock back to ADS in Tucson and few hundred later I was told not to use it as a rock slider!!!