New some advice for tires/soft top 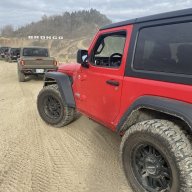 Just bought my 2020 2dr 2.0 turbo 8spd JL last month and already put 2000 miles on it cruising around during quarantine. I don’t plan to mod this Jeep much as it’s my daily driver and I don’t do crazy off-roading just a lot two tracks in northern Michigan and some mud.

I know I would like some mud tires on it but don’t plan on doing a lift or much else besides steel bumpers and a winch later on. what would the best overall mud tire/size you would recommend for a fairly cheap price? Even something used would be fine.

I would also like to get a cheap soft top for the summer months and store the hardtop until winter. Any recommendations that could point me in a direction? Doesn’t have to be fancy just something more convenient than a hardtop.
Advertisement

A friend of mine has these on his JK and has been happy w/ them, and they're D rated so a bit softer than the E rated sets that are common in this size. The 285/70/17 should fit pretty good on your stock JL. Might consider a Rubicon take off suspension to give you a bit more room, and you can find those parts on the site for a good price.
https://simpletire.com/achilles-285-70r17-mao287017-tires

Did a bit of research on these and I think I’m going to pull the trigger. The only negative thing I could find about them was how bad they performed on wet road conditions.
Advertisement
You must log in or register to reply here.
Share:
Facebook Twitter Reddit Email Link