This is my first post here as I'm a soon to be owner of a 2019 JL Unimited Rubicon 3.6 with 6-speed manual in Granite Crystal. I ordered back in April and have an estimate delivery of mid-June, so the Jeep is expected pretty soon. The only options I added were Black Hard top, Painted fenders and Trailer tow group.

This will be my 3rd wrangler. Previously had a 95 Wrangler YJ and a 2007 Wrangler Unlimited X JK. I made small modifications to both of those, most notably small lifts and more aggressive/slightly larger tires on each. Probably my biggest take away from modifying both was I should purchase exactly what I want with my next Jeep from the factory. I've noticed the effects that even small increases in tire weight and height have on performance. I decided I would rather have the better drive-line components that are suited for a heavy off road tire (like the stock BFG AT that come on the rubicon). The 285-70-17 BFG AT was actually the exact tire I had on my JK, and same tire, but a 31", on the YJ.

So I'm pretty dead set on keeping it stock but there is one thing I do regret after reading more on this forum. I declined getting the Mopar Steel bumpers because I wasn't aware that the Rubicons come with different springs based on options. I figured I didn't want to add the heavier steel bumpers to avoid sag and loose some clearance, but it sounds like the factory actually compensates for that with different springs. From what I understand from reading some other posts is that the most weighted or considered options for longer/sturdier spring rates from the factory are Hard Top, Tow Group and Steel Bumpers. Fortunately I have two of those so maybe I"ll get lucky and get some of the more sturdy springs. Which brings me to my first question:

Thanks a lot and thanks to everyone for all you've helped with already as I've been lurking for quite a while! 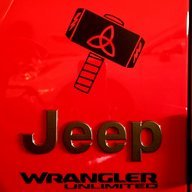 I don't think the springs are any different whether you get the steel bumpers/hard top/etc or get the base Rubi items...

digitalbliss said:
I don't think the springs are any different whether you get the steel bumpers/hard top/etc or get the base Rubi items...
Click to expand...

They are. There are 9 different part numbers for front springs, and 15 for the rear.

mwilk012 said:
They are. There are 9 different part numbers for front springs, and 15 for the rear.
Click to expand...

Interesting, but are we sure they are different spring rates?

digitalbliss said:
Interesting, but are we sure they are different spring rates?
Click to expand...

We don’t know a lot about the Mopar parts.
OP

With the JK generation, the 2 digit variable in the different spring part numbers was higher numerically for the stiffer springs. I know its not really confirmed but it seems like there's some reason and some randomness to all that. If anyone has some part numbers with their options to answer my first question i'll take it with a grain of salt, but still interested.
OP mwilk012 said:
They are. There are 9 different part numbers for front springs, and 15 for the rear.
Click to expand...

@mwilk012 do you know the ranges in the different part numbers?

I found one rubicon owners part numbers who has a hard top and steel bumpers. They didn’t mention tow group so I assume they don’t have that option.