Members old and new -- check in and wave hello! 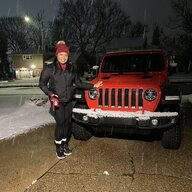 Hey everyone! Wanna give a big wave from the Granite State. On my Quest for a new JLUR very soon. Wish me luck!
Advertisement 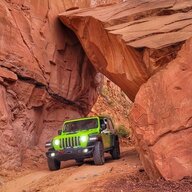 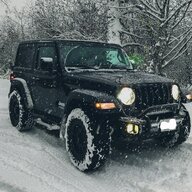 New Member and first-time Jeep owner after years of wanting one. Picked up a 2 door JL Sport. Looking forward to exploring British Columbia 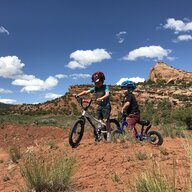 I'm also new! Wall of text coming up, but I do have a real question for any forum members out there who have advice (2nd to last paragraph).

I'm planning on picking up a green Willys tomorrow and driving it back home to SLC area (from Phoenix...). Never planned on buying a Jeep before now. I planned to drive my Pontiac Vibe until it died (which it won't, being a Toyota). And being a tightwad decided "fun" vehicles just weren't something I'd ever bite on. But my 8 year old was diagnosed with a brain stem cancer earlier this year called diffuse intrinsic pontine glioma, or midline pontine glioma based on newer terminology. That put me into a crisis of sorts, since generally kids with that diagnosis have about 12 months on average to live. 5 years at maximum it seems.

Since the diagnosis, I've been frantically trying to use my time to make good memories while we're able. For the time being he's got no real issues, but if he starts to decline, it'll be different for sure. He said he wanted a convertible, so I, being a dad in crisis, went looking for one. Then I decided a wrangler made much more sense since it's a convertible I can take anywhere, not just streets in the summer. My kids have always oohed and ahhed at Jeeps when they see them, and I planned to buy a Bronco (since my wife was actually born in a white '86 OJ edition). But they're delayed, and well, I don't know if I have 6-12 months to wait for a "fun" vehicle. The more I waited for the Bronco, the more I started to decide that I actually like the Wrangler's looks a lot more for some reason. It's just...cool?

The hard part is that I know it's a terrible time to buy a vehicle. Looking at these forums it seems like generally people get an under MSRP pretty easily, but on ordered ones. When I talked to the dealer, it seemed like it would be 4-6 months on an order, so I went looking for an off the lot one I liked. Mostly because I legitimately don't know if my son will be around in 4-6 months. It's super scary.

I found a Green Willys unlimited (https://www.earnhardtcjd.com/api/inventory/GetStickers/?sv=MQBDADQASABKAFgARABOADYATQBXADgAMwA3ADAAMgA4AA==&make=Jeep&dealerCode=43389) that fit the bill, and the dealer had it listed for MSRP, rather than over. So I counted it lucky and put down a hold on it thinking Jeeps are selling like mad like everything else. Is it a really bad deal to just pay MSRP on a Wrangler now? It seems like that's about the best I can do without ordering given the market, and it doesn't look like it'll change any time soon? 46,000 net selling price basically, with about 1,100 in "additional plates/docs fees" and then taxes for a 51,000 total price. It seems super high, but is that just the market? Should I be trying to get any off this or anything else from them?

I'm excited, but apprehensive. I hear the Jeep community is like a club you get to join once you have one. I've experienced something similar when we used to drive a Geo Metro. But for completely opposite reasons :D That was more like the brotherhood of crappy cars.

First of all, I'm very sorry to hear about your sons diagnosis.....I hope its on the far end of time frame for him......far far end.

To your question, anything at or below MSRP is doing ok in this market.....especially if you can find something on the lot. I took delivery of my ordered 4xe a little over a month ago, I paid MSRP. Usually its below....but Wranglers hold their value well, top spots and time is of the essence at this point....

Get it and make memories.....the few bucks possibly saved will wash away as your making memories with your family. 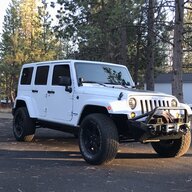 Lost In The High Desert

After lurking around this site for a little while, I am finally getting around to posting...

New to the Jeep world after years of enjoying motorcycles and trucks off road. We bought a 2012 Sahara Unlimited Arctic Edition with the manual transmission this past summer after being egged on my buddies who also have Jeeps.

I have been enjoying getting her dirty since picking her up with a few off road adventures and a week camping trip with my wife and our dog. We are looking forward to pulling it behind our truck camper setup on extended camping trips when it's too hot and dusty to bring the dirt bikes. Flash forward after a few months of enjoying the JKU and my wife decided she wanted a Jeep too... So she placed an order for a 2021 JLUR XR in the Snazzberry at the end of September and she's now anxiously awaiting the delivery.

Reach out if you are in the Oregon area! 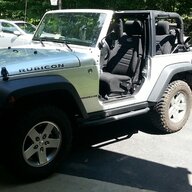 Hello from Richmond, Virginia! Just sold my 2012 Silver JK Rubicon, and am anxiously waiting on my Sting Gray 2022 JLU Rubicon with the Xtreme Recon package and more (ordered on opening day, 10/8). Cheers, my Jeep brethren 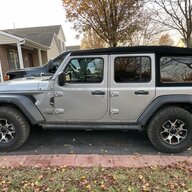 Hello everyone name is David. Me and my woman decided it was time to join the Jeep family. We had a 2020 Ford eco sport. I couldn’t stand that thing. So we traded that in for a 2019 billet silver jlu with 3600 miles, we are in love with this thing we’ve wanted a Jeep for a long time so here we are. 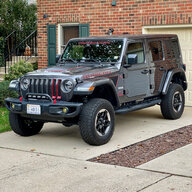 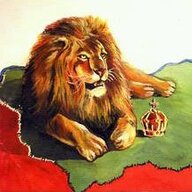 Vehicle(s)
MY22 JLUR (being built) 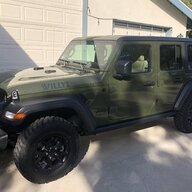 Hello from North Carolina! Just ordered a 2022 JLU Willys, which will be my first Jeep. 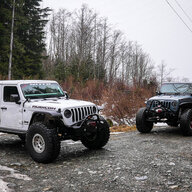 Hey!! Thanks for having me…

here is my 2019 Jeep Wrangler JLUR Hello all!! New here and thinking about getting a Jeep!
2

The Jeep Wave and the Gladiator
2 3

Fun Little Jeep Story...For the Old and the New Owners... Cherish it!
2