When the dealership recalibrates your speedometer for larger tires do they use the obd port or the SGW Gateway port?

The SGW is a pass through module connected between the OBD port and the rest of the Jeep’s network. Nothing ever gets plugged into the SGW module.
OP
OP

mwilk012 said:
The SGW is a pass through module connected between the OBD port and the rest of the Jeep’s network. Nothing ever gets plugged into the SGW module.
Click to expand...

So there would be no reason to unplug it?
they would just hook up to the obd to change the tire size?
If the sgw plug is unplugged can it drain your battery?

No, there is no need for the dealer to ever remove the connection to my he SGW module except in the event that it fails and needs replaced or has a bad connection. The witech won’t communicate with the pcm without passing through the SGW. 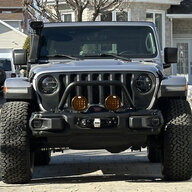 Because the OBD port is now “protected” and harder to get to, my dealer told me that they can’t program for new tire size anymore

So I got a remote plug-in and a port, registered to Jscan and did it myself.

The more technology jeeps have, the less clue the mechanics have on how to work on them. Hence why I avoided moving-on to the 4xe and kept my 3.6.

Whoever told you that is an idiot.
OP
OP

so i had a warranty fail and had to pay because a cable was disconnected in my dash,
my jeep has only been to 2 dealerships.

dealer A is blaming dealer B for unplugging a wire.
i called dealer B today and they said they did not change the tire size because you have to buy a license from Chrysler to get it done so they skipped doing it [but didn't tell me]
dealer A says that plug being undone caused the battery to die and jeep will not warranty it because i took delivery of the jeep like that.
Dealer B said that is the worst excuse i ever heard and called dealer A and now dealer A is going to try to push it through warranty to refund me my money.

just now i was contacted and they denied the claim again stating the jeep would have thrown a code and there would have been a part failure so it must me customer related.
i have never plugged anything into the obd port or other so i let them know
now dealer A is on the phone trying to get answers and "go to bat for me" with Chrysler

My SGW module has been unplugged for four years. It doesn’t set a visible code.
OP
OP

yes i just got the final word and they denied it again, stating that the plug undone would cause it to not be driveable. [even though the tech drove it around and into the shop]
also they stated having a winch hooked up and a rear light on the bumper would drain the battery, however there tech did a parasite drain test and it passed that there was no drain.

the only way they would warranty is if they had a failed part. since they were able to get my battery jumped and brought to 12 volts from 5 volts. that means it was not a failed part and was customer caused.

i am now told to contact jeep wave and ask if they will offer assistance.
so 2 dealers went to bat for me and @JeepCares still denied it.
OP
OP

to all and any please don't take this as a "whine"

i am just sharing so others can see the process and the stuff that can be pulled on you to save a buck.
so i got monthly calls and emails from jeep to extend the warranty and they cant even honor it on a 9 month old jeep that has been in for various other warranty fixes.

I'm not going to sit and complain and say ill never buy a jeep again and throw a hissy fit!

i'm simply sharing whats going on in a fellow jeepers life.
yes now i am going to install a battery tender under the hood so it can charge when i have it sit for more then 2 days haha.
You must log in or register to reply here.
Share:
Facebook Twitter Reddit Email Link

Looking for end of lease advice.