Going to be ordering a JLU Rubicon. Wondering if the sliders you can order with it are adequate or should I skip them and just go aftermarket. Have heard of flexing to point of body damage. Definitely don’t want that. If aftermarket what brand performs and fit well? On west coast rocks are an issue so I want to make sure I have the best protection. 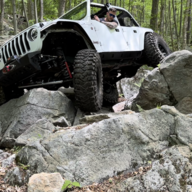 bit late on the response here, but if you're still interested in the answer to your question:

mine have held up pretty well in the last 2 years. I say "pretty well" somewhat generously. a few trips ago I dropped the driver's side HARD on the slider and it did flex it into the body. don't really know the extent of the damage to the paint but I don't really care all that much. it'll be covered when I eventually replace them. I've dropped the jeep onto them numerous other times without issue and they do their intended job pretty well. So i'd say that unless you're instantaneously dropping your entire jeep onto them from about 3 feet in the air, they'll probably do just fine

the factory base ones are ok and will hold up better than most cheaper end after market sliders, their biggest issues are they are tight to the body both in how close they are and how far the stick out which can cause the rails to make contact with the body when hit by a rock or the rock is big coming from the side and hits the body instead

there is the upgrade option in the order form, these guys are wider and will help protect the body better from larger rocks that may contact the body, but the rails can still flex up and make contact with the body. The damage with the rails hitting the body will be minor, small dent and/or chipped paint is a hard to see area.

both of the mopar rails are body mounted rails which means they bolt to the tub on the pinch seem and some welded tabs on the bottom of the body, and many aftermarket also mount this way. The main issues with these is that over time the body will start bending at the mount points. The other style of sliders are frame mount which bolt directly to the frame, some also will bolt to the body for added stiffness. Frame mounted ones will hold up much longer as the frame is a much stronger mounting point but they tend to have more flex in them because of how far they stick out from the frame.

another thing that the mopar rails do right and many for show rails do wrong is they are straight and smooth, nothing to get hung up on. The main use case for rock rails and most under body skids for that matter is when you use them you are resting some amount of the jeeps weight on the rails and are driving forward over the rocks and hard edges and notches in the bumper can create a point where you can wedge that rock into making it just a little harder to get out of that spot, never a show stopper but can make things trickier

Do Rubicons have factory sliders?