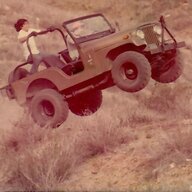 If you could get a Wrangler with a factory V8 sales would go through the roof! Its a shame Jeep (FCA) doesn't have a "smallish" V8, like the Chevy EcoTec 5.3, which is a push-rod design that is reliable, and it is smaller and lighter than the 5.7 Hemi. It would fit easily in the engine bay, and have a lower center of gravity than the Hemi. Its also got plenty of power (355 hp, 383 lb⋅ft of torque). Not as strong as the 5.7 or as torquey as the 3.0 Eco-diesel, but - in my opinion - great for a Wrangler running 33-37 inch tires. Nice flat torque curve, easy to modulate the throttle off-road... But not gonna happen. However, I heard from two guys who work at my local dealer that Jeep is testing a gas-powered turbo 6. They didn't say if it was the 3.6 Pentastar, or something smaller. I know some folks are going to want documentation on that claim, but I don't have it - sorry. I'm just honestly reporting what I was told by two guys (one in sales, one in service) who I wheeled with a while back; neither have a reason to make up stories. Personally, I'd rather have a gas V8, but a gas-powered turbo 6 from the factory is better for a lot of users than the factory diesel. But... we know that a gas turbo 6 is not coming in 2020, and the diesel is.
You must log in or register to reply here.
Share:
Facebook Twitter Reddit Email Link