Squibbles said:
Mainly in dunes, with a 4:1 4 low may be too low and 4 high may make it a little difficult to get moving especially with a manual. They wouldn’t make 3 speed transfer cases if you always needed the lowest 4 low, having a range from to 2.7:1 thru 10.8:1 gives you the ability to have the perfect ratio for anything. All depends on where you’re going with the rig and whether you have an auto or a manual and let’s face it in 99% of situations the auto is better.
Click to expand...

You mean the auto is easier. So there may be 1 single type of terrain where lower isn't better. The manual transmission pretty much negates that as well.
Advertisement 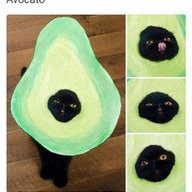 Roky said:
That’ sounds like an awesome rig brother.....however, I’m talking to OP about off the lot vehicles and from the modern era...,.,,,anyway, hope y’all are doing well out there where you are.......
Click to expand...

I was emphasizing that these new 8 and 10 speed automatics allow a 3.31 to be aggressive enough off road, more capable than a 4.56 in something older. I would look at the crawl ratio and not individual numbers in the gearing.” 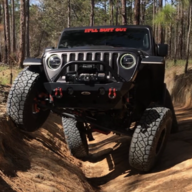 Squibbles said:
I was emphasizing that these new 8 and 10 speed automatics allow a 3.31 to be aggressive enough off road, more capable than a 4.56 in something older. I would look at the crawl ratio and not individual numbers in the gearing.”
Click to expand...

I get what your saying...... but I would take the rubicon with 8 speed auto as is off the shelf for all off-roading over any other vehicle off the shelf This includes sugar sand, which I run in almost every weekend....

Roky said:
I get what your saying...... but I would take the rubicon with 8 speed auto as is off the shelf for all off-roading over any other vehicle off the shelf This includes sugar sand, which I run in almost every weekend....
Click to expand...

I would definitely get the rubicon unless I needed a truck or was doing stuff where I needed a longer wheelbase in which case the four door is probably fine. 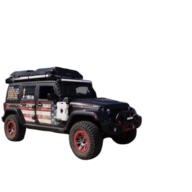 I keep reading about how people love their Ranger or Toyota truck but how do they compare axle wise to the Gladiators HD D44s front and rear. Last time I looked at a Ranger, Toyta or Honda truck, I thought their axles were no where near the same standards as the Gladiators D44s.

As for the argument about stick over automatic. I had a buddy that had a TJ with a 5speed, he stalled it on a shelf road in Moab and slid off the side trying to get it stopped on the wet gravel. Autos won't stall on you (not normally). Also ran into one of the famous buggy drivers at the Hammers and he told me that there was no way he could do the things he does with out an automatic tranny, stalling was the biggest issue. I would put up the new 8speed autos up against any 6speed manual off road any day.

As for the auto with 33's or 35s on stock 3.31 gears, forget your warrany if you have issues and didn't change gears when you went up tire sizes. No matter how well the 8speed works with the Pentastar, it won't save your warranty if you go up in tire size. Look at the posts where Jeep cancelled warranties for aftermarket parts and upgrades like tires, etc. 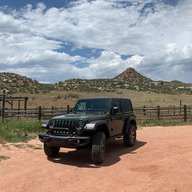 Humvee4us said:
Hey,
I'm thinking about buying a 2 door Wrangler Rubicon for off-roading. However, as I was doing my research I learned that there is now a rather large segment of off road pickup trucks with the leading ones being the Chevy Colorado ZR2 Bison and Toyota Tacoma TDR Pro for midsized, the Ford Raptor for half ton, and the Ram Power Wagon; Ford Tremor; and GMC AT4 for HD pickups. I'm thinking about doing some rock crawling, going through deep mud holes, river crossings, going up steep slippery inclines, snowy roads, and perhaps some sand but not high speed.
So this brings me to my 2 questions: 1) if high speed and towing/payload are not important to me do any of these pickups match the Wrangler Rubicon for this type of off-roading or is the Wrangler Rubicon in a class of its own? And 2) which of these trucks would be the most capable for my applications and which would probably be the least capable and how would the others fall in between?
Click to expand...

I have both a rubicon and a Raptor, the Raptor is fast and comfortable and I’d say if you are doing a Baja type trails it’s best. The Jeep is far more capable on trails, the Raptor is too wide and lots of blind spots on steep inclines and declines. Plus the Raptor is about 70k and not something I want to screw up. The Jeep I have had plastic fenders which I can replace if they get scratched for about 60bucks. Just my opinion.

Great review in Expedition Portal on the Gladiator Mojave.