Information/Specifications on the 2021 Alpine Speaker Upgrade

Does anyone have a link or an idea where I can get the actual specifications on the Alpine speaker upgrade on a JLU? Thanks!
Advertisement

I've had the sub out and tested it and each voice coil is 2 ohm. I believe all of the other speakers are also 2 ohm.

If you want a cheap small upgrade I added polyfill to the sub enclosure and noticed a differnce (not huge but it is noticable) and I've seen comments from others about adding it to the soundbar and dash enclosures as well.

If you want a decent improvement you're going to have to replace speakers and add an amp as the factory amp isn't powerful enough to drive a 4 ohm speaker well enough.

If you want to fit a different sub into the factory enclosure the JL Audio 10TW3 is basically the perfect depth. I'm going to be fitting a DD SL710 to mine but going to have to make a custom mount for it as it's slightly too deep..
OP
OP

Thank you for the information, I appreciate it. 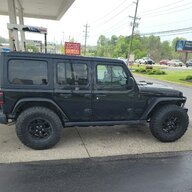 So I'm going to break down those numbers into real world figures, thank you for posting that because I was also curious.

Subwoofer enclosure is .5 cubic ft. Roughly the minimum size for most 8" subwoofers on a sealed enclosure. For porting that volume you can't go bigger than a 6.5 inch.

This is much lower power than I thought the system had. I'm going to assume the sensitivity on the factory speakers is pretty high to get the volume they produce.
Advertisement
You must log in or register to reply here.
Share:
Facebook Twitter Reddit Email Link

Upgrade from the Alpine System?