The discussions have been all over the place concerning jump starting the JL.
It appears that you cannot simply connect another vehicle to start the engine.

1) To what post(s) should the + connection(s) be made?
2) What negative ground location should be used?
3) Is it true that even a high amperage boost will not suffice...that both the main
and ESS batteries need time to charge up before trying to start the vehicle?

Any dealers' techs on this forum have the correct procedure sent to them by FCA?
Has AAA (or equivalent) been informed about the proper procedure for jump starting?

Members have stated that they have used a battery charger to slowly re-charge both batteries
but what if you are far from any electrical outlet?

If I am out, overlanding, what would be the best preparation to be self-sufficient, carrying
an extra third charged battery or carrying a portable jump starter booster?
Advertisement

I'll try to take some of these questions on.

Chuck, according to the manual, the technique for getting a JL rig with 1 or 2 dead batteries going is no different than for other vehicles: dead positive to live, live negative to dead grounding point away from battery and fuel injection system.

It's what happens behind the scenes after these steps that differs from conventional designs with single battery based vehicles.

Based upon the many posts on the forum about his subject matter, and the owner's manual guide to wait a couple of minutes with these cable's connected before trying to start the dead JL, it would seem that some basic and necessary charging of the ESS battery must be taking place during this time. If fact cranking the dead JL, if I have this correct, temporarily isolates the JLs two batteries and no crank will even be attempted if the JL's ESS battery isn't showing a basic level of "juice." I don't think the wait time has much to do with the engine/generator of the running rig charging its battery in anticipation of the dead JL's draw from it upon attempting a crank so much as it does charging this ESS battery.

I think you are correct Chuck that the fact that the ESS battery must first reach a basic level of charge is of significantly greater importance than the capacity of otherwise electrically compatible source's current flow.

"Any dealers' techs on this forum have the correct procedure sent to them by FCA?"

Even now, with months gone by I wonder. Brandon Halon is an accomplished FCA tech who I believe learned and shared this info on his Jeep Informant YouTube channel as a result of his own trial and error and review of the rig's electrical schematics, more than some technical service bulletin that expressly covered the "what's" of what is going on behind the scenes as it relates to these batteries/cranking/and charging.

Some of us disagree on what leads on the main fuse bar in the Powder Distribution Center lead directly to the ESS battery. We know more than we did than when the rig was first brought to market, but we still have questions that perhaps only time will answer.

If you asked this question with some frustration attached to it Chuck, know I share it as I think many of us I think do.

"Has AAA (or equivalent) been informed about the proper procedure for jump starting?"

You would think they (the AAA) should be officially informed but I wonder. If FCA techs are still in the dark about this, I can't imagine any field rep from AAA knows of this unless they've already experienced it. Do I think they should?....you bet!

"Members have stated that they have used a battery charger to slowly re-charge both batteries but what if you are far from any electrical outlet?"

Is there special design to this ESS battery in terms of useful service life, deep cycle, more reliability than the regularly sized battery? You would think that this component being quite the potential "Achilles Heel" of the JL that is should be, but I just don't know, and wouldn't be surprised if little was special about this small battery, except maybe its price.

Should we own a second of this battery. Keep it charged?....keep it with us? Will the JL give us ample time to get it serviced before it craps out on us? How many in the aftermarket make this battery? Are we limited to a single or few vendors that will charge us a King's ransom for it?

And what happens in the winter, when cold affects this smaller battery two ways: because it carries less ability to deliver juice across longer durations of time, and because its surface area to volume ratio is a higher value the reguarly sized batteries that allows cold to affect its ability to deliver a charge greater than physically larger batteries?

I asked Brandon that one. His answer: 'good point, especially since I've already had to swap out some defective ESS batteries and the 2018 has barely faced much ownership (although well tested) during cold months yet.'

I keep telling myself that FCA rigorously tested this rig across time and terrain and keep my fingers crossed, but I wish, like you, I had better info here so I could better plan for potential bad scenarios.

Cheers.
The happiest days in a home/boat owner's life is when they buy and sell. 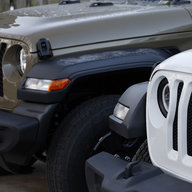 TIDALWAVE said:
If I am out, overlanding, what would be the best preparation to be self-sufficient, carrying
an extra third charged battery or carrying a portable jump starter booster?
Click to expand...

Due to the apparent high failure rate and it's critical role in the starting process, If I was preparing for overlanding, I would have a spare charged ESS battery (CYLA14B4XTA 14B-BSBATTERYAGM).
jeepbikerunphotograph

Jebiruph said:
Due to the apparent high failure rate and it's critical role in the starting process, If I was preparing for overlanding, I would have a spare charged ESS battery (CYLA14B4XTA 14B-BSBATTERYAGM).
Click to expand...

This is how the Jeep craze started. Great Grandfather to the JL.
2

How to disable remote start?

How to start your JL with a dead key fob