How many of you Manual JLs out there like your 6speed?

Hey everyone, I currently own a 2018 JL RUBICON 6speed, and was wondering how many of you are out there ? Do you all have any issues with your tranny? love it? hate it? I test drove an automatic the other day and felt it was a bit faster than the manual , possibly due to no lag time between shifts, but I have been a manual person since I first started driving cars lolz, give me your feed back ! Thanks guys ! 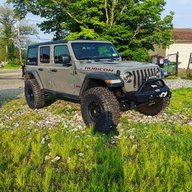 I have a 6mt JLUR and love it..I've had 10+ vehicles and at least 5 of them were manual. Aside from my 92 C-pkg MX-5, this is the best-shifting manual I've owned. There are days when I wish I got the auto [because it is faster and easier to just pop it in D and cruise] but shifting manually in this enthusiast vehicle ticks all the right boxes for me
2018 JLUR - Sting Gray 6MT - Black hard top, black fenders, black leather, Cold Weather, ElecInfoSys, Trailer Tow/HD Electrical, Proximity, Safety Group, LEDs. Mods: LoD Signature front bumper & skid, aFe cat-back, 2" MOPAR lift, 37x12.5r17 Cooper STT Pro, 17x8.5 Method MR312, Fox 2.0 stabilizer, 10k lb winch,JCR spare plate, Baja Designs OnX6 lighting, Rigid Ignite reverse lights

Now for a daily driver I might be more inclined to go auto. 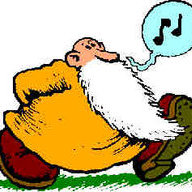 I like it a lot, but I've always preferred manual in a 4x4.
OP

I agree guys, manual is the way to go in a Jeep Wrangler ! 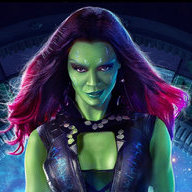 Mine is my daily driver, and I wouldn’t order it with anything else. Love my manual.
Cleverly disguised as a ... 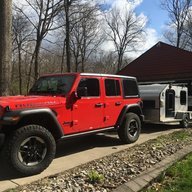 WranglerBane said:
I agree guys, manual is the way to go in a Jeep Wrangler !
Click to expand...

The clutch and shifting is fantastic. The gearing ratios a bit odd, not very linear to me, but overall a great transmission. I would buy it again.
I’m sure the Auto is great too, but I like to spin the tires now and then lol. 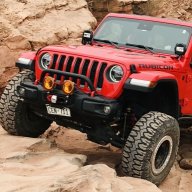 Mine should arrive within the next couple weeks and I can’t wait. I was only able to test drive a Sahara with manual as none of the rubicons locally were a stick. My current JKU is a stick and I wouldn’t buy one any other way.

Was wanting the diesel but would not give up a manual to get one. Still bummed about them not offering that combo. 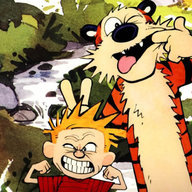 Torero said:
The clutch and shifting is fantastic. The gearing ratios a bit odd, not very linear to me, but overall a great transmission. I would buy it again.
I’m sure the Auto is great too, but I like to spin the tires now and then lol.
Click to expand...

I couldn't agree more about how non linear it feels. I love manuals and have had many even in my 3500. I daily mine, and it just makes the jeep feel heavy and slow. I get it's not a race car, but it doesn't feel as light as the 8 speed.
2019- 2DR Mojito Rubicon 2.0t, 8-Speed auto, hardtop, Infotainment, Alpine, Steel bumper, Tow pkg, LED, remote proximity, Cold weather, Aux switch and painted fenders. 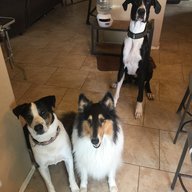 JLU sport here...short answer is manual-absolutely! But I think we’re all on that side.
What I have noticed is during these past 3 months and almost 6,000 miles is the vehicle has become easier to drive. When it was new, the clutch was so powder puff lite that I just hoped it didn’t stall (and stall it did, with great ease). 6th gear became fantasy-land and I found myself never allowing the engine below 2,000 rpm. It would simply not accelerate. Comparatively, my previous vehicle, a ‘14 Mazda 3 HB had zero need for a 4th gear, and cruised in 6th easily at 45 along these flat Arizona mesaways.
But! Now with some actual break-in miles of just about everything a Jeep does, the vehicle has come into it’s own. Clutch take-up has an actual point, I am stalling less often and, dare I say, the 3.6 is getting loose and power has evened itself out nicely. This engine wants you to juice it up to 4,500 and even beyond, and I do abide lol. 6th gear is even a thing!
One thing I have noticed is during a rip in 2nd gear, going to 3rd it kinda catches...the Mazda did the same thing so maybe it’s a cable shifter thing. Yes, the JL stick is a cable-shift.

Come, join us. We all shift down here: https://www.jlwranglerforums.com/forum/threads/the-clutch-gang.7373/
—
2dr Granite Rubi 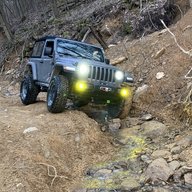 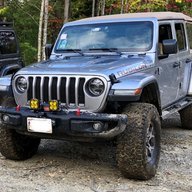 12,000 miles in and still loving my manual JLUR! It is my daily driver and I still prefer the manual for most on and off-road scenarios, but there are the occasional hill climbs that I’d like to see what an automatic does in 4Lo when with the manual you either have to choose to lose some momentum and make a gear change, or with the automatic I’m assuming it’s far more seamless. The only thing even approaching an issue for my manual is in 4Lo, shifting into 3rd gear grinds unless I really wait to feel it is ready to accept the shift, which leads to momentum loss, even with the clutch to the floor. I’m not sure if that is to be expected with the synchros or what, so any thoughts on that would be appreciated.
'18 Billet JLUR 6MT, Tan Soft Top, Mopar 2" Lift, 315/70r17 K02s, CMX760 CB, CoolTech Antenna Mount, MORE Skids (Oil Pan & TCase), MC Rear Dif Skid, LoD Destroyer Sliders, Trailgater, OnX6 20", Zeon 10S w/ Cascadia4x4 Flipster V2, F55 FlatLink E, 67 Designs Rail, iPad mini w/ GPS puck, Gaia GPS, Rhino-Rack backbone
Advertisement
You must log in or register to reply here.
Share:
Facebook Twitter Reddit Email Link

Poll: How many JLs (other than your own) have you seen on streets so far?