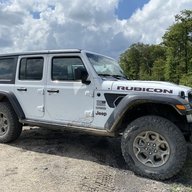 I finally made the trip west to Flagpole Knob yesterday. I've seen it mentioned several times during my search for some decent trails in the area. Most of what I found about Flagpole Knob referred to a 7.6 mile out and back route. With the trail being 2 hours away, I wanted something a little more substantial to make the drive worth it. After doing a bit of map recon using Gaia, I mapped a trail route for us: Route to Flagpole Knob. This was my first real use of Gaia for both route planning and on trail use and I have to say, I'm very pleased with it!

Saturday morning, I linked up with my buddy and is kids who drove his Tacoma over from southeast Maryland. After a quick breakfast and a 2.5 hour drive to a spot just west of Harrisonburg, VA, we hit the trail head. The route had the perfect progression from simple gravel road to rocky and muddy spots that required attention to line selection. Some spots resulted in the use of a spotter just to be safe, which is NEVER a bad idea!


After an hour of winding our way over and around some large hills (apparently they're called mountains out here, but wouldn't pass as such in Montana or Colorado), we hit a bit of a log jam. The two of us heading west at the same time a group of 7 Toyotas of varying models were heading east. As we were spotting where to pull our two rigs off the trail to let the larger group pass, another two rigs also heading west caught up to us. These two were another Toyota (this one a Forerunner) and a crazy built Bronco that was an absolute BEAST! The four of us decided to keep together as a group once we cleared the trail for the larger group to pass. This worked out well as the Forerunner driver had been on the trail many of times and was able to give us a good idea of what to expect.


We made it to the top the first "mountain" (it's only 3,885 feet in elevation) on our route, Meadow Knob. Great view and a great spot to have some lunch and stretch the legs. I took the opportunity to throw my drone in the air and unfortunately didn't capture the best footage. I'll have to remember to pan and tilt the camera much slower next time. There was one clip worth salvaging.

While at the top of the mountain, 8 more rigs joined us. All but one was either a Tundra or a Tacoma. And the one that wasn't a Toyota was an old Jeep XJ...that was broken down and had to be towed to the top of the mountain by one of the Tundras. There was definitely a LOT of ribbing me and the other Jeep driver since we were in enemy territory! What was planned to be a short 30 minute stopped turned into over an hour and a half of great company, great views, and great fun. My buddy with the Tacoma realized one of the last group that came to the mountain was a member of a forum he was on and wound up joining us as we departed Meadow Knob for our ultimate destination of Flagpole Knob.

On the trail and headed west once more, our group of five cleared one set of rock steps and pulled to the side to let a smaller and faster moving group of Tundras pass, also heading west. Since I was now running point, I held at the bottom of the next set of obstacles so we didn't crowd the faster group. The two Tundras cleared the rocks and pulled off to the side to get some pictures and videos of our group navigating them. Our group pressed through the rocks and as I cleared the last rock step, one of the Tundra drives commented that the Jeep ate up every one of the rocks and made it look way easier than it felt in their Tundras. While only a small bit, it was some redemption for Jeep in the eyes of at least a few Toyota rivals.

The rest of the trip to Flagpole Knob was scenic and short with the summit offering views that were just as good as Meadow Knob and amplified by the light of the setting sun. While my Tacoma buddy and I took in the view and talked with his forum friend, our Forerunner and Bronco pals headed home for the day. A half an hour later, and we were back down to a group of two, making the jaunt west to cover the last 3.6 miles of the trail. While nowhere near as challenging as the first part of the trip, the views were great and the mud pit we came across was well worth it! We marked the end of our day on the trails with a photo at Briery Branch Reservoir, which is apparently obligatory for anyone who wheels Flagpole Knob. All in all, a remarkable day that was well worth the drive. I'll definitely be back to both wheel and camp. While not terribly difficult, the trails were rewarding and the people we came across were always friendly and courteous. I'm glad I made the decision to go with the longer route instead of the shorter 7.2 mile out and back. And spending the day with an old friend made it even better!

Be safe y'all, and thanks for reading!

Off road recovery! Saving an XJ from the Alberta mud!