Two weeks ago I installed the JL 2" Mopar lift kit in my garage. Despite it getting some deserved flack for the front spring bow, it has been fantastic on pavement. It rides incredibly smooth and with the JL's powertrain improvements, the Jeep doesn't have to work hard at all rotating 35" KO2s. Likewise, the larger brakes on the Rubicon are equally as confident in stopping this monster that actually stands taller than my old JKUR did with its Teraflex 2.5" lift and the same tires.

So, this past weekend, a buddy of mine and I took our Jeeps up to test our new modifications. Mine with the new lift kit and his, a '17 JKUS, with an AEV 2.5" lift and a Teraflex 44 front axle. Both performed flawlessly, but we didn't really expect anything less. In fact, the trail run has made me question the quality of the Teraflex lift kit I had on my JKUR. Just one trip on that thing destroyed the bushings on one of the rear sway bar links and the two front control arms.

The trail we ran was by no means extreme, but it had enough rock, loose terrain, and steep grades to exercise our suspensions. My Jeep crawled over everything without breaking a sweat. I didn't hear any scrapes, dings, pops, or other weird noises as components were compressed, stretched, and tasked. There was a slight knock that eventually developed as I was coming back down, but it ended up being a loose nut on the driver's side sway bar link. I had torqued everything except that one nut before going up.

I tested both the lockers and the sway bar disconnect and had no issues. There was no binding, the spring made no contact with the bump stop that I could see or feel, and my spare didn't bend or damage the tail gate. Not only is the JL more stable on-road, but off-road as well. It didn't sway and bounce around nearly as much as my JK used to. The Fox shocks did an excellent job absorbing the washboarded dirt roads, too.

The only issue I did encounter was the technology going a little apeshit as I gained altitude, but that has nothing to do with the lift kit. Somewhere above 10k feet, the computer complained about the Auto Start/Stop not working and the ParkSense/Blind Spot Monitor being blocked. After getting to a stopping point and heading back down, both were working just fine. I ran the Pitch and Roll gauge on the instrument cluster, which was cool, but expectedly gimmicky. It didn't really apply to this particular trail since it wasn't crazy enough to require it.

That being said, I'm very happy with the 2" Mopar lift kit so far. It adds capability without compromise. It's not adjusting a ton of geometry and obviously isn't complex. It's simple and works. A lot of lift kits and suspension parts for the JK were not only designed to improve performance, but to correct flaws and shortcomings. I don't feel like this kit has to correct or fix anything. I'm simply asking for more clearance and I get it. Other than my speedometer being off, the power and performance is still there. The ride is still smooth. The turning radius remains sharp. Everything still feels stock. I'm still waiting for the aftermarket to solve the spring bow, but regardless, adjustable trackbars are definitely in my future. 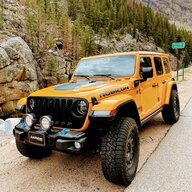 Which trail was that? 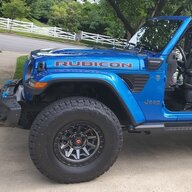 Excellent write up. I think you just convinced me to get the Mopar kit.
OP
OP

Which trail was that? 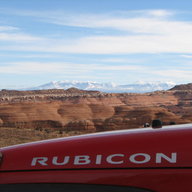 
Before reading that, I was getting ready to post that it looked like Mount Baldy, which I almost got stuck in back in the winter of '04. We were in an our '04 Liberty. The ice broke and I had to work it to get it out. (Edit: I should clarify, when the ice broke it kicked the ass end over to the right which left me little to no room to back up.) We got passed that climbed the slight incline easily and then ran into snow that was too deep. It wasn't until after I turned around and started coming back down that I realized the trail was 100% ice. My wife walked down, and fell twice, as she was too scared to ride down with me. I slide all the way down and only stopped when I hit deep snow at the end. Fun times. 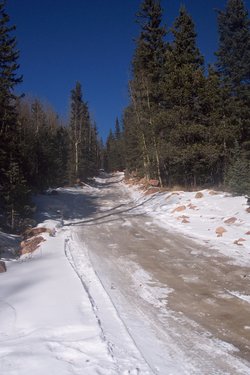 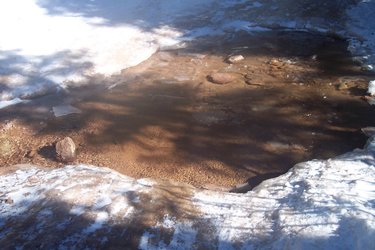 My First Impressions of the JL
2

Anybody do anything cool with the box that the Mopar lift kit came in?

2 door JLR in SoCal with lots of steep-ish grade wheeling - should I be getting a JLUR?
2