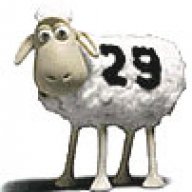 We took our 4xe JLUR off-road for the first time at Peters Mill Run trail yesterday, and everything mostly worked as expected. The one bobble we encountered was, we saved the HV battery in e-save mode until we got to the trail and the group leader suggested we switch into manual shifting mode. In that mode for the first half of the trail we found we couldn't switch into Electric mode as we were planning to do. Halfway through the trail ride, I shifted it back to normal Drive mode (JL was in 4L for the ride.) When in Drive mode the Electric mode was immediately available and we completed the second half of the trail on battery. (Which was awesome! BTW.)

There was another 4xe on the trip with us and she had the same issue. Since we didn't figure it out until we left from the mid-point break, we could only update her at the end. She tried it for a moment there and it worked for her in D mode also.
Advertisement 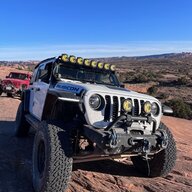 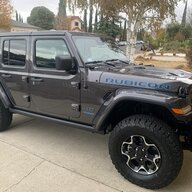 If you're in manual mode, and go into 4L, it will knock it out of Ev mode and turn the ICE on. That is how it is designed. 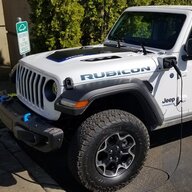 SilverBackJLCA said:
If you're in manual mode, and go into 4L, it will knock it out of Ev mode and turn the ICE on. That is how it is designed.
Click to expand...

I have been quite happy with leaving the transmission to shift itself in low range which allows electric mode to operate. The transmission shift points are very well programmed with way more compression breaking than any other auto tranny I've used...and electric power in low range is great!

4xe have Prius-camping mode? (vs. electric draw for fridges, etc.)