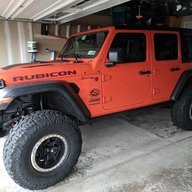 Living in high snowfall average area, most Jeepers normally switch from their wide MT's in October here to something much narrower and normally in the snow rated AT form, even new All season radials tend to do better then the wide MT's in my experience

So yes narrow tires with a good tread design tend to perform better in the snow but as mentioned traction and common sense go hand and hand. Just because you have good narrow tires doesn't mean you still wont slide around or float in slush or ice 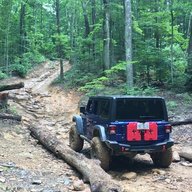 That’s why I like my Falkens so much. They only slip on ice.
However, I have been driving for 30+ years in all winter conditions so I’m sure it’s also due to experience.

35x12.50 is literally a “flotation size”. They are designed to float over terrain due to wide tread.

Floating over snow is desirable when you are in deep snow. The last thing you want is your tires buried in the snow and your Jeep resting on its belly. Don’t ask how I know...

But if you have under a foot of snow, you really want your tires cutting through and grabbing the road as much as possible.

In my experience, humidity is the biggest determinant: dry, powdery snow is fun; wet, sticky snow is slippery and likely to get you stuck or, worse, lose control.

The first time I experienced full butt-pucker in a four-wheel-drive was running BFG KO2 (old generation, but extremely similar) on a one-ton Ford F350 diesel six pack. I had tools and hunting gear in the bed, so the truck was just a hair over 8,000 pounds — about 60% heavier than my JLUR. The tires were 35-12.50-16.5s, and the truck hydroplaned horribly, twice. I switched to 35” Duratracs and never had to worry about hydroplaning again. As others have said. It’s a question of how well the tires channel water away from the tire/road interface. The KO2s are great on packed snow and ice, great in the sand, and great on the dry/wet pavement, and decent on rocks. They are terrible in mud, and ultra-terrible when there are patches of standing water at highway speeds.

No single tire is great at everything. That’s why I run summer tires (KO2) in the dry weather (summer for us), and studded Duratracs (Raptor) or studded Grabbers (wrangler) in the winter. (I don’t have enough experience with the Grabbers to have an opinion yet, but Goodyear doesn’t make the Duractrac in a 17 or 18 x 37 tire, so I’m trying something new.)

(For two hunting seasons I ran 36” Buckshot Q tires on that big Ford. They were narrow for the height, aggressive, and soft tires — and they were pinned for studs, so mine were studded. They were, bar none, the most amazing winter tires I ever ran. I pulled a 5,000 pound trailer up an icy ramp when the ice was so bad cars were sliding off the road to the right and left because of the camber. Zero propensity to hydroplane, owing to the large lugs and open channels. The downside? Extremely expensive, very loud, especially as they accumulated miles, and extremely short tread life — as in spent after two winters (~20,000 miles) on an 8,000 pound truck.)

Every tire is a compromise.

Experienced this pretty bad this year in really heavy rain. I was in the far left lane traveling pretty quickly to keep up with traffic when I hit a large puddle of water. Just foster right over it. Scared the crap out of me. Quickly came up on sleep and floated out of control again. After that I switched to 4hi and slowed way down. I felt like a Jeep should be able to handle this I can't let these little cars fly around me. I learned my lesson.
In general with heavy rain I get to the slow lane and cruise and am careful when hitting standing big puddles of water.
All this is with 33 inch Mickey thompson baja atz tires. I have some research to do before I put on 35s. It's also fun teaching my wife that she can't drive the Wrangler like she drives the mini cooper lol.
Advertisement
You must log in or register to reply here.
Share:
Facebook Twitter Reddit Email Link

Driving through 2 feet of snow
2