I see a few on Autotrader with $3-8k discounts. Haven't called on any of them yet, but was curious to see who has been getting discounts on either ordered or off-the-lot cars and how much?

I noticed that also on autotrader. I called a few of the dealers and they stated that the manufacture manages their website and their inventory is posted by them automatically on autotrader with all incentives, even those which do not apply. For example on the 392 I contacted for it was listed with a $7k discount, but was being sold at MSRP, and even that one was actually already sold as it was ordered by a customer. This was just my experience from one dealership I called. There are a few people on here stating they got invoice on a 392, but they either have an extensive relationship with their dealer or know the GM/Owner. So far I’ve only seen one for sale on autotrader that was not sold to the ordering customer and that ended up selling within an hour at MSRP. Few of them listed at $5-10k above. 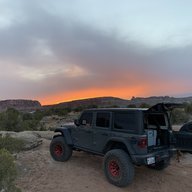 You will be lucky to see MSRP for one that is available, my best guess is the first ones on dealer lots (not sold orders) will go for an amount over MSRP, and we are still months away from that happening. I still have sold orders that are still waiting to be built in my system, and then dealer lot orders will follow that.
“Snazzy” - 2021 JLUR 2.0
Advertisement
You must log in or register to reply here.
Share:
Facebook Twitter Reddit Email Link

Anyone buying the extended warranty on the 392s ?