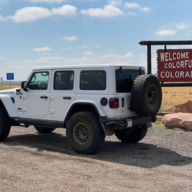 Bought our JLUR new a few years ago and have been driving stock since. Took it to Jamborees all over, Death Valley, Ouray, Arch Canyon, Table Mesa, and have done a little wheeling in other groups too. All this exposure to different trails and what other people have done has really helped me to dial in what I think will be a nice little build for us. We will be working with a local shop to Denver, CO: High Country Performance 4x4 https://hcp4x4.com. We are really excited about the transformation that is going to take place. I'll be posting some details here shortly as we get everything dialed in and you can expect more photos too. And now for some details:

At one point, I thought that I couldn't go wrong with building an AEV JL370. Lots of praise from the press. FOURWHEELER magazine subtitled their first drive piece with: “This is the Rubicon that Jeep should be building.” How could I go wrong? I’m saved! American Expedition Vehicles has just released me from hours/days/weeks of analysis and angst over these decisions!

But I didn’t stop doing my own research. I kept on interviewing different people about their builds. I became addicted to YouTube. I literally stalked some folks to get on their calendars. I started dreaming about the end of the pandemic and what I wanted to do this summer.

Eventually, I concluded that the AEV JL370 build would be a great Jeep. But in some very real ways, I had already kind of outgrown it. We have already put 30K miles on our Jeep and done some amazing trails! The more research I did, the more I realized that I wanted more than the JL370.

Technically, this is my wife’s Jeep, her daily driver. When she realized that I wasn’t going to settle for a small lift and some 35” tires she expressed concerns about losing the on-road drivability. She doesn’t want to sacrifice much when headed down to Safeway for a bag of groceries. TLDR; pretty sure we are swapping cars.

All this led me to consider other options. My criteria was to retain a decent level in the Daily Driver column while making some incredible improvements in the off road prowess column. I was honestly concerned that to have the improvements I desired off road, I would literally need to be okay with sacrificing all DD basics. But I think that I have come up with a good balance between the two.

So, in early June this is what is going to happen….

Bumpers/Winch: AEV RX stubby on the front with a Warn Zeon 10K winch. AEV Rear Bumper with RX Tire Carrier. I really like the way that the AEV stubby looks – I couldn’t let it go.

Wheels/Tires: KMC KM545 Trek wheels, Satin Black/Gray Tint, with a -12mm offset and BFG MT KM3s all around. Because of where we live, I expect that in the winters I will be swapping out for ATs for the snow traction.

Well, dear reader, thanks for hanging in there. Pictures to come as this transformation takes place!
OP
OP 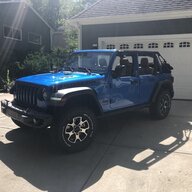