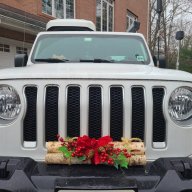 I moved the charge controller of the Cascadia Solar System into the cabin today, instead of leaving it in their recommended location here:
View attachment 462310

It was over 85°F today. Took the solar panel on its maiden voyage. Coasted about on residential and dirt and gravel roads for a few hours at low, sometimes merely idling, speeds. Accidentally lost a jerry can, so the mileage and duration doubled, as I retraced my route. Found the can in a ditch. Still watertight!

It seems the low airflow around the charge controller at very low speeds isn't enough to keep it cool, as it had overheated and stopped charging most times I checked it. The plastic air box it was mounted on isn't very good for thermal transfer, and the heat-absorbing solar panel exacerbates the under hood temperature.

The original wiring is enough to get into the cabin, but probably only passenger-side. The wires from controller to battery seemed pretty tight going to driver-side.

I just stuck the panel cable into the channel behind the hood weatherstripping: Then I ran all the wires under the cowl: Then I stuffed the myriad wires into the panel. Seems I missed the photo for this step.

Turns out that the solar panel cable is too thick for the door to close upon, so you must run it under the cowl and panel. I've a slightly squashed cable now. The clearances around the hinges are too small as well, so don't loop the wires near them.

Right beneath the door detent worked for me. The topmost three strands are the panel cable and two battery wires. There's a good foot or so of slack remaining, once inside the cabin from this location. You should be able to make it into the glovebox.

I'm probably going to mount the brains outside somewhere, so I can monitor the blinkenlights. This also provides easy access to the auxiliary voltage-limited wiring for the future.
Advertisement 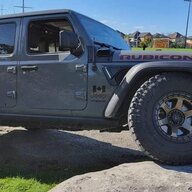 Why not route it through the firewall?
OP
OP

DarkAardvark said:
Why not route it through the firewall?
Click to expand...

I already had two cables going through the cowl for GMRS and 3.5 spraker, and the stories I heard about the passenger-side firewall suggested that the fat, maybe 8mm, cable of the solar panel wouldn't fit.

Worked well, anyways. Any future wires will probably have to go through the firewall though, or under the passenger-side footwell plug, but I've been saving the latter for something.
OP
OP