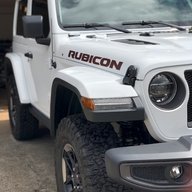 old8tora said:
How do they transport the Jeeps to Hawaii ? In shipping containers on APL ships , I imagine ?

By the way , the garage door is not wide enough for the fenders .
Click to expand...

Everything transportsted by ship. Vehicles are generally transported open, but you can put it in a container if you pay more.
Advertisement

FastDNA said:
Looks great, keep an eye on the trim piece on the drivers side.
Click to expand...

I was going to wrap the trim pieces too, but i didn’t like the look as much since the top of the hood is white. If they yellow quickly, I’ll wrap the trim and buy a black hood deflector to complete the look.

traviswalker007 said:
Hi, my name is Ethan with Jeep Customer Care, How may I help you today?

Ethan: Hello Tony how can I assist?

Tony Walker: i should say my 60,000.00 dollar jeep grill is turning yellow

Ethan: I would have to recommend you go to a dealership to find out why this is happening. If you make an appoint at a dealership and contact us back we can get a case manager involved

Tony Walker: I was just told by jeep care on the forums to contact you and open a issue, but you say i must go to dealer first? this is funny because there are hundreds of complaints on the JL forums with this issue??

Tony Walker: so is this what jeep care does just pass the issue on to a dealership when you guys know this is and has been an ongoing issue for months?

Tony Walker: Im sure you have had numerous compalints on this issue correct? and im sure you huys already know what has caused it considering you have requested customers to send the grills back for testing?

Tony Walker: this is not a random issue so not sure why you say take to dealership so they can investigate it??

Ethan: This is personally the first time I am hearing about this and I am unable to determine what the cause is and at this time I can not say if we have a fix for it. This may not be a random issue but with out the dealership looking at it we are unable to assist.

Tony Walker: wow!! typical response i will screen shot this and post on the jl forums for the jeep care rep to see. thank you for taking my 60,000.00 dollars and giving my garbage quality
Click to expand...

i see that lots of peeps have chimed in and let you know you're a less than good human being. that employee doesn't deserve that and you should be absolutely ashamed.

also- you spent 60k on your jeep? lols. you got taken for a ride bud. based on your attitude though, you deserved it.

GM at the dealership called me and had me bring my 2dr. JL with the yellowing grill to their Service Department at 8am this morning.

GM was there to greet me when I drove in. He said hang on a minute and left to come back in 3 minutes or so with one of their Senior Techs. He said the Tech had just pulled the grill and moldings off of a newly arrived Bright White JL and that they were going to replace my grill and moldings with them. Yes, they would also put my gray grill inserts and gray headlight buckets on the new grill before installing it.

Took about 40 mins to do and the workmanship by the Tech was spot on..... and.... the front of the JL looks normal/great, Bright White, again.

I got the JL back in 40 mins and it was spotless. Not a fingerprint on it or a foot print on the floor mat. Was just as I had given it to him...spotless/just detailed.

GM and Tech both spoke with me and shook my hand after the grill was swapped and before I drove off. I told them thank you and that I was going to be writing a letter to the dealership's owner.

The GM was terrific and really came to bat for me in regard to dealing with his Zone Rep and FCA, in getting a resolution other then painting the grill which I did not want to do. Took him a week to work things out but he did the deed. He told me he wouldn't want it painted either.

GM, told me that this new grill would hopefully not yellow before FCA came up with a grill that would not yellow. He assured me if this grill yellows (it probably will, unfortunately) that he will get me another new grill and moldings..

After this post, I will be typing up a letter to the owner of the Dealership to let her (yes, her, she owns 3 or 4 dealerships) know about my dealings with the GM and Tech and that my letter should go into their personal jackets and that the owner should praise them... give them a that-a-boy. They represented her, her dealership and FCA well.

In closing, sure glad I purchased the JL from a local little dealership!. I would have not seen this remedy with some / most of the bigger dealerships.

Hi Rhinebeck01!
Which dealer did you go to? I'm in NY as well. My grille is starting to yellow and I want to deal with the best service department available.
Thanks

jk8290 said:
picked my car up on 8/4 just saw that it is starting to yellow today
ugh
i wish they had the option to give us the black satin grille
Click to expand...

Well, much depends on the FCA Zone rep and more... When I had the yellowing problem I do believe they would have gladly provided me with a black satin grill. Problem was I did not like the look of the black satin grill on my bright white JL. Had it been a tad different shade of black, I would have liked it.

IF you want the black satin, do talk to the dealership GM and ask him to talk to the Zone rep for you. Just ask them to please make it right lets say and get you the black satin grill. Cost to them would be just below $300 to do this. That is less they they will pay to have your defective grill and the 3 grill moldings painted.

Just be calm and talk to your GM. Just ask him to assist you in getting the Zone rep to approve getting you a satin grill rather then a paint job.
DO know ahead of time that you can deal with the color of the black satin grill..
Last edited: Aug 31, 2018

jk8290 said:
Hi Rhinebeck01!
Which dealer did you go to? I'm in NY as well. My grille is starting to yellow and I want to deal with the best service department available.
Thanks
Click to expand...

Your best bet in my opinion is to go to the dealership where you purchased your JL/JLU. Go in and talk to the Service Manager and the General Manager... mention to them how you would like it taken care of and then see what they come up with, with their Zone Rep. Your dealer may need to push a bit for you if you want say a black satin grill. Hopefully, your dealership will be willing to help you through this.

- Do know that FCA will take care of this issue.

jk8290 said:
picked my car up on 8/4 just saw that it is starting to yellow today
ugh
i wish they had the option to give us the black satin grille
Click to expand...

What if your new black satin grill turns brown ? 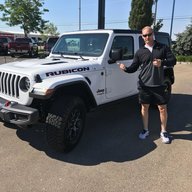 BoisetheCat said:
i see that lots of peeps have chimed in and let you know you're a less than good human being. that employee doesn't deserve that and you should be absolutely ashamed.

also- you spent 60k on your jeep? lols. you got taken for a ride bud. based on your attitude though, you deserved it.
Click to expand...

I have an old Army Jeep grill which I may mount on the front of my JK for fun . Cost merely $50 . Get one for the fun . Good luck .
Click to expand...

excellent idea my man!! I think it may work im sure the quality was way better back then for sure!! and yes my frame is gold plated thank you LOL

old8tora said:
How do they transport the Jeeps to Hawaii ? In shipping containers on APL ships , I imagine ?

By the way , the garage door is not wide enough for the fenders .
Click to expand... 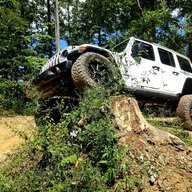 Same issue only 3 months in. And here is mine!!

Build date?? I wonder if they have a fix yet. 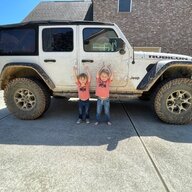