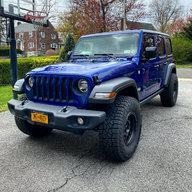 Jakjax said:
Got the fenders and liners done. Not sure I love the chopped flares now that they are on, but at least I have a combo now where the tires won't rip them off.

The front liners are from Rusty's, look good and are easy to take off/on. They also don't charge an arm and a leg for them which is a bonus. (Seriously, what is that? $200-$300 for a few pieces of bent tin) Crazy.

I went with the Bestop twill fabric doors. Love these things. I needed something for the highway drive to the trail that I can take off and throw in the back and wheel door-less. The jeep feels like a big go-cart with them on..... awesome.

I reached out to the great guys at Knoxville Driveline for...... well, drivelines. They did an awesome job. Originally I had hoped to retain the stock ones but the front was bending the flange at the T/C output side at full droop, probably could run it for a while, but it's days were numbered so I gave it the axe. The rear was unexpected, once I got the M220 under the jeep I discovered the pinion input was about an inch or more closer to the rear T/C output shaft than the stock axle position was. The stock driveline was almost bottomed out. I lengthened the rear control arms to compensate and push the rear axle back as a temp fix, but I ended up doing the rear driveline as well.