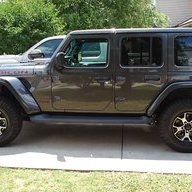 PSI said:
I don’t mind the ESS, but after hearing from you I’m going with the Tazer ESS defeat and a full DEF delete. Impeach that Tesla.
Click to expand...

It's all good and fun, I love my Tesla and ordered the Truck and my Rubicon so again
Taser away your Jeep do what you want.
Jail Guiliani and Frump
MERRY CHRISTMAS

smithrd65 said:
Question, why do people dislike the ESS? ... ..., if it saves 1 gallon of gas a year just maybe our kids kids will have an Earth to live on.
Click to expand...

I don't like it because there's a delay when starting. I know they say it's supposed to be seamless, and there isn't supposed to be a delay, but to me it feels like there's just a slight delay. And really, there probably is. Normally you take you foot of the brake and you start to idle forward, but with ESS there's a fraction of a second delay while it needs to restart.
Am I in that big of a hurry where the fraction of a second matters? No, but I just don't like the feel of it. And as someone else had mentioned, I've had old cars that wouldn't restart if they died, so yeah, it's a little psychological too. If my vehicle is running, I want it to keep running.


madscientist said:
...I believe in the law of conservation of matter: ....
Click to expand...