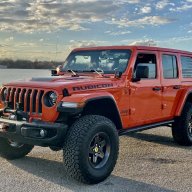 I still get a little shimmy when it’s cold out, above 65 it’s 99% solid. The second box was night and day different, I would say some of it was because I bled the system better but the over center adjustment on the second box is at the high end of the scale, the first box was right at the low end, like .1 less and it would have technically failed and been out of spec. FCA still has a huge issue with quality control on these boxes in my opinion. I did end up sending my old box to one of the engineers I spoke with per their request. If they did anything with it is a different story.

Damn it, so 3rd one might be the charm.
@Geekjeep Assume you got dealership to replace the replacement? How'd you convince them?

I got Jeepcares involved and documented my case. In my case it was obvious. If the vehicle was moving slow and you’d turn the wheel. You’d literally feel the steering wheel like jump over notches. I also had jeepcares coordinate to have a tech there when I dropped it off. We showed him this. This was so obvious that when he felt it. In a second he’s like yeah that’s messed up. They ordered a new box that day. It was installed a few weeks lates

Looking for help on wobble induced at lower PSI and between 35-55mph.

I also chased down a wobble but far from your experience. Ended up almost eliminating it by replacing the MC stabilizer with the OEM stabilizer.

However.....when wheeling this weekend I aired down to the teens and the wobble started back up especially between 35-55. Not as bad below or above. I aired back up to 30psi and wobble is gone.

This is leading me to think my tires are the issue, I went through 2 balancing (One weights, one beads...better with beads) and two alignments before the OEM stabilizer reduced wobble and so far eliminated Death Wobble.

any opinions on wobble being induced at lower PSI?

I would try doing a road force balance. But I have come to believe there is no consistency in these things and what works for one does not work on others.

Agree with others. MTs can be a constant balance battle, specially if you wheel in the rocks. Balance related wobble can can trigger DW. I know this from experience. I replaced a set of KM3 with Ridge Grapplers just for these and other reasons. If you've been fighting it though it could also just be a bad tire. Have you also rotated? 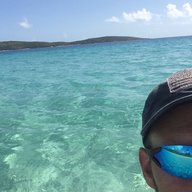 I'm taking my Jeep in to have the steering box replaced today. Makes me nervous! I don't have a reason to not have confidence in my local dealership but sure don't want to make things even worst like some of y'all seem to have experienced. Here's to hoping for success the first time!
Cheers!

After my TSB steeling box replaced by dealership. I experienced a lot of weird steeling issues. Like pulling to left or right, minor death wobble! I had been dealing with it and trying to figure out what is going on. Alignment checked, caster angle checked! In the end, I found out that the 42mm pitman nut torque was lose!! Very lose!! I can turn it by hand. Turns out the dealership did not torque it down at all!! After I retorque it, my Jeep drives like a dream! Hope that help!

I had an appointment yesterday at 12:30 to have my steering box replaced. I just got a voicemail from them about 10 minutes ago requesting permission to remove my winch so they can move the radiator forward.

Uh... Did y'all have to move your radiator forward to replace the steering box? I do have the diesel engine but I still can't see why all of that would be necessary.
Cheers!

I don’t know why they would need to do that. I did mine from under the jeep.

Jeep&dogs said:
I don’t know why they would need to do that. I did mine from under the jeep.
Click to expand...

Every video that I watched showed it being done from below. Granted, none of the videos appeared to have the diesel engine and I can tell you that there is NO room under the hood with the diesel. I still can't see how the entire steering setup would be different.

The only thing I could think of is if they are having issues getting the pitman arm off. But that’s a long shot 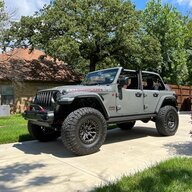 BearcatMLA said:
Every video that I watched showed it being done from below. Granted, none of the videos appeared to have the diesel engine and I can tell you that there is NO room under the hood with the diesel. I still can't see how the entire steering setup would be different.

Maybe to get to the IShaft bolt. Who knows Went by the dealership and met with the mechanic. It is no secret that the engine compartment of the 3.0 diesel is very crammed. According to him, and what he showed me, the steering box can be loosened and turned but will not fit through the space inside the engine compartment without sliding the radiator forward about 1/2" to 1". Because I put an aftermarket front bumper and winch on the Jeep the dealership said I would have to pay for 1-2 hours of labor time. to move it forward so that they could move the radiator and front grill forward.

It seems unnecessary to me but I'm no mechanic. He said he has done many on the 3.6 and it was easy with no space issues.
Cheers!

Vibration in steering at the edges of “dead spot”
2

The unresolved steering issues: Would this get Jeep's attention?
2