Anyone use Hoist-a-Cart with JL? 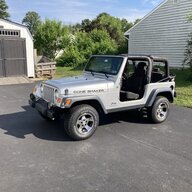 snowtx1 said:
I sent a note to Lange today to see if they have the kit for the Hoist A Cart to convert the JK to the JL. I'll post the response.
Click to expand...

I emailed them a few months ago about this and they replied with this: https://langeoriginals.com/products/jl-simple-and-hoist-a-cart-rear-hook
It’s $50 and replaces the rear hook on the hoist a cart. I bought it, but haven’t used it yet. Guess I’ll find out in the spring how well it works.
I’ve used the hoist a cart for two removals/installations of the hardtop on my JKUR. It was clunky and cumbersome, but it worked.
Advertisement
RIP "The Professor" 1952-2020 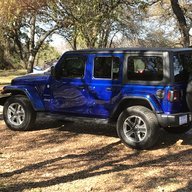 I ordered the same hook and it's on the way. I'll try it when it gets here.

snowtx1 said:
I ordered the same hook and it's on the way. I'll try it when it gets here.
Click to expand...

snowtx1 said:
I ordered the same hook and it's on the way. I'll try it when it gets here.
Click to expand...

I used the cart once and then sold it. It was a bit cumbersome, but I’m sure that I would have gotten better at it. My biggest problem was that once the top was off and stored on the cart, it still took up a lot of space in the garage. I ended up installing a hoist that works fine and stores the top over the Jeep. As for the new hook, you can’t put it through the back window without removing it from the cable. I called Lange and they said that was how it was designed. So every time you want to use the cart, you have to take the hook off. Poor design in my opinion. As least the nice people at Lange refunded me the money for the hook. Door storage cart; Anyone use Top Lift Pros Store-A-Door cart with half doors/uppers?

Hoist a cart Gen 1 on JL

Lange Hoist-a-Cart for JK (NOT JL!)