A Guide to Hating New Jeeps: How to Establish Your Jeep as the Last Great Jeep (JK Owners Edition) 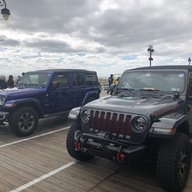 RussJeep1 said:
Unacceptable. The number of troops coming home with Chronic Traumatic Encephalopathy (CTE) from the concussive injuries they experienced from road side bombs, despite their presence inside of fully armored Hummers or tanks at the time of detonation is reaching, like in the NFL, epidemic proportions.

Watch the link. Look at pictures of destroyed Humvees. Watch tanks being blown several feet off the ground and on to their side.

Yes--these vehicles save 1000s of lives and weren't available in the older conflicts and theaters of war you mention. If you served then thank you. But today's combat veteran is anything but a pansy. And no, I never served, but I serve those that are and who have.

We respect the Jeep in part for the historical role it played in helping us/soldiers in times of war. Let's respect the person behind its wheel no less.


Calm down. Pretty sure this was meant as sarcasm along the same line as this entire thread.
Advertisement 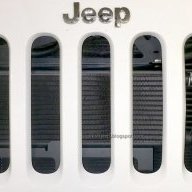 RocketScientist said:
Wow! Thanks for resurrecting that. I had never seen it. Superb!

I now know my place in the Jeep universe, particularly when some 18 yr old, in a drafty, leaky, ratty-topped TJ passes me, while I'm in my auto-climate-controlled quiet cabin, with heated wheel and seats, sipping an $8 mocha-skim-machiatto-latte-venti, listening to Watercolors Cool Jazz on my 435-station satellite radio. I'll get no wave, and know I'm not worthy, in the worst Jeep ever made, the Jeep that will be the demise of the Jeep brand. I'll feel lower than low....

Have no fear... the JL's hard top is weak and cracks easily and the new soft top leaks. (see official recalls/bulletins and user reports). You'll be welcomed by the drafty leaky ratty top TJ driving community in no time :cwl:

Firemadz said:
Calm down. Pretty sure this was meant as sarcasm along the same line as this entire thread.
Click to expand...


The thread was tongue-in-cheek. No argument there. But the post I responded to cited soldiers of our more recent 30 years in desert conflict as pansies because they had Hummers their predecessors didn't: rigs that gone blown up left and right, along with their occupants, by road side bombs much more powerful than the rig's armament.

And that post I responded to seemed to be said seriously, with no indication otherwise, I'd like to think in response to the prior yet equally stupid post that those who criticize a soldier's Jeep better be soldiers themselves or they aren't real men---all when soldiers fight to preserve a way of life that allows us to speak our minds.

I hope we don't criticize each other's rigs period. But doing so, or riding in Hummers, or serving in the military, much that I enormously respect those who do, is neither a standard, I think, by which real men nor pansies are or aren't defined. As we all know, women lost lives in these conflict too, along with surviving with traumatic injuries: some time won't heal.

I'm pretty sure this was stupidity, regardless of its intent, and it bothered me.
The happiest days in a home/boat owner's life is when they buy and sell. 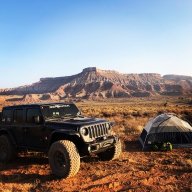 
A Practical Guide to Hating New Jeeps: How to Establish Your Jeep as the Last Great Jeep (JK Owners Edition)

Hello JK owners! First let me say congratulations. There is now a Jeep that is newer than yours. As I’m sure you all know, every Jeep newer than the generation that you own is an abomination that must be shunned. For the last 11 years it was YOU the JK owners that carried the burden of having the shitty new Jeep. But now, with the reveal of the new JL Wrangler you no longer are stuck with the worst Jeep ever made! However, it’s not time to celebrate yet. There’s a lot of work to be done before you’re truly ready to pass the torch of shame on to the next generation.

CJ, YJ, and TJ owners have all gone through this process before and now it’s your turn to join us in the traditional hating of the new Jeep! To help you though this exciting and emotional time I have prepared this simple step by step guide on how exactly to hate new Jeeps while establishing the JK as the last truly great Jeep.

Step 1 - Announce the death of Jeep:

The first step is the most important. Jeep has suffered many deaths over the its 76 year existence. In a futile and foolish attempt to keep up with market and regulatory demands, Jeep’s many owners made various changes to the very core and soul of Jeep itself ultimately leading to the total death and failure of the brand.

Let’s look at a few examples of past deaths:

So now say it with me, “Jeep died in 2018 when Fiat took over and made them make the JL.”
Now of course some people may not understand why a new model immediately marks the death of Jeep. That's why we need to explain it to them in simple terms.

Every new Jeep has changes. Everyone hates changes. Choose what you believe is the most egregious of these changes and form your campaign behind it. The fact that the new Jeep has or doesn’t have this feature means that it isn’t a real Jeep. This will be your rallying cry. Put it on bumper stickers, in your signature, your flair, or in the posts you make. Let’s take a look at some past examples:

Express your displeasure at the dilution of the Jeep community. Establish blame for the death of Jeep. These statements serve the duel purpose of disparaging new Jeep owners and discouraging others from following in their footsteps. This one is easy. Just fill in the blanks.

“These new (Model) owners. A bunch of (Group of people typically not associated with Jeep) and (Second Group of people not associated with Jeep)who care more about looks than capability. Jeeps were never meant to have (New feature) but these (Groups chosen before) won’t buy a car without them. What’s next? (Absurd luxury feature)? What happened to making the most capable vehicle they could make? You can’t even get a (Removed feature) anymore because most of these people won’t do any more off-roading than the grass at their local (Location popular with new generation’s current “hip” crowd). It’s not even a real Jeep anymore it’s just (Jeep brand’s current owner) trash. And they’re so expensive too. These people drop (Current MSRP, fully loaded) for what’s basically just a (modern vehicle generally viewed as "uncool") with the Jeep logo. And the ones who modify their Jeeps are just as bad. It’s all just bolt on (Low end parts supplier) bumpers and (Newest vehicle lighting technology) lights. All about appearance and nothing about substance. AND THEY NEVER WAVE!”

See? it's easy when you can just reuse old arguments! Now that the Jeep world knows that you’re mad, what do you do?

These people are ruining Jeep and they need to know it! They’re no better than people who bought the Compass. If you see one on this subreddit or elsewhere on other forums let them know that they don’t drive a real Jeep and aren’t welcome here. I know it seems harsh but believe me, the only way to make sure the Jeep community survives is to make sure no new people are allowed in ever.

Respond to simple questions with total distain. Downvote pictures of stock JLs or new purchases. Make sure nobody feels welcome. Don’t tell them about the trails you like or offer to go off-roading with them. They are unworthy. If they wanted to get into Jeeps they should have done it the way you did it. You earned your Jeep. You scoured the earth looking for that perfect restorable Jeep. You spent countless hours rebuilding every nut and bolt from scratch. You didn’t just waltz into some dealership and finance some bland new car. You built your Jeep.*

* Note: If you bought your JK new from a dealership then you should instead tell JL owners that they should have gone back in time and bought a new JK like you did.

By now it should be clear to the JL people where they stand in the community. Now we need to make sure it stays that way.

This may be the hardest part. As more and more JL owners begin to flood the roads and trails you need to make sure you stick to your guns. The new JL owners may seem nice. Their Jeeps may seem cool or even Jeep like but make no mistake, they are still driving an objectively worse vehicle than yours.

NEVER concede that there are good things about the new Jeep. Avoid the mistakes others have made in the past such as:

“Man I wish I had air conditioning in my Jeep.”
“Coils do ride better on the road.”
“Power locks actually sound pretty nice in cold weather.”
“Your Jeep DOESN’T leak everywhere?”

Saying nice things about the new Jeep should be seen as a sign of weakness. You’re not weak. You’re a JK owner.
You may find yourself admiring the JL from afar. You may start reading great things on automotive websites. You may even feel a desire to test drive one yourself. Resist this temptation. The JK is the greatest Jeep ever made.

I'm not going to lie to you dear JK owners, Step 5 is where most people fail. For years Jeep owners have tried to definitively prove that their Jeep is the last great Jeep, yet despite this Jeep sales continue stronger than ever. Maybe this can change with you. If enough people hate on the JL with enough forcefulness, you can not only make sure that people know that the JK is the last great Jeep, but make sure that the JK is also the last Jeep period.

Which is what we all want… right?

Thats cute. I remember my first beer too.

But I have to add, and sooo wished I took a vid of the encounter. Plugged my 4xe in at a Target that also had like 20 telsa chargers. watched a Telsa owner walk by staring at the Jeep and trying to confirm in his mind that 'yes, it actually has a plug'. It was hilarious! AND my point is, JEEP now has the best FUN electric vehicle (sure, short mileage hybrid), but still....I realize from this point of view, the 4xe is the WORST jeep by far ever to roll off the assembly line. But I still love it. its my first Jeep.
Advertisement
You must log in or register to reply here.
Share:
Facebook Twitter Reddit Email Link

Poll: Curious As To The Numbers... % of Jeep owners who upgrade suspension
2

This is how the Jeep craze started. Great Grandfather to the JL.
2

Jeep owners.. how do you feel knowing your on top of the food chain?
2 3