Any updates to production schedule??
Advertisement 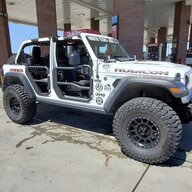 I hope it turns out better than the Hummer 2 and 3 did. people realize you can't haul nothing in the bed it's too small and you took all the cabin space from inside. two and three did not sell it was a horrible mistake and then Hummer went under because of Chevrolet had the government bail them out. Only company that didn't take money from the government was Ford that says a lot about the company with you like a Ford or not it's well run by the Ford family all those decades and century and they didn't need a penny from the government. They're smart they know what to do there will be no making no more cars I heard of the Ford line except the Mustang. He wants a Ford Taurus anyway LOL
Advertisement
You must log in or register to reply here.
Share:
Facebook Twitter Reddit Email Link