The 2018 Jeep Wrangler Unlimited (JLU) finally decided to drop some its disguise, showing for the first time an almost naked view of its side body panels, windows, door cut lines and roof line.

While the overall design of the four-door JL Wrangler does not appear to stray far from the outgoing model, a few key differences can be seen from this prototype that still remains largely concealed.

First, as expected the windshield and A-pillar have a noticeable rake, angling downward by a few degrees compared to the JK Wrangler.

The JL Wrangler also comes with new running boards that are wider and tougher looking, with a step surface that covers the entire length of the front and rear fenders (unlike the JKU which has unusable contours near the fenders and between the front/rear doors). The running boards appear to be made from the same thick blow-molded textured plastic as that of the current model which should match the fenders on trims not equipped with body colored fenders.

Both the door handles and hinges are covered up but suggest that the exterior door hinges will remain (and be as easily removable as the current model). The doors work their way up to the bottom edge of the roof line which appears to be largely unchanged and hints at a removable hard top on this prototype. The JL’s drip rails also extend the entire length of the roof to the tailgate as opposed to the current JKU’s rails that terminate after the rear doors.

The tires spotted on this prototype are 18″ Bridgestone Dueler A/T, the same tires as equipped on the current JK Wrangler Sahara. Previous JL/JLU prototypes have worn 17″ BF Goodrich All-Terrain tires.

The 18″ wheels size, Bridgestone Dueler tires, and running boards point to this as a Sahara edition JLU.

The rear is still heavily covered in thick camouflage but peeking out from underneath is at least one new feature, a backup camera, that will be a first for the Jeep Wrangler. 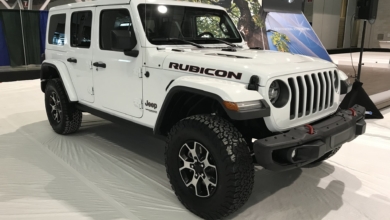 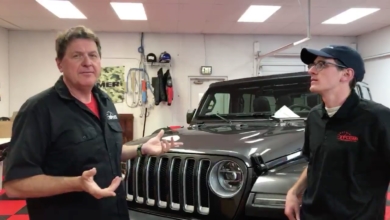 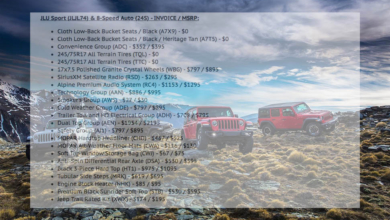